Amitabh Bachchan has been super busy with Sooraj Barjatya’s Uunchai and is presently shooting with Anupam Kher, Danny Denzongpa and Boman Irani. Three of them have newly shot a song and Mr Bachchan shared a series of resemblances from the sets. The veteran actor also identified how a few junior artists have unfailingly featured in his films and interacted with them on the sets. 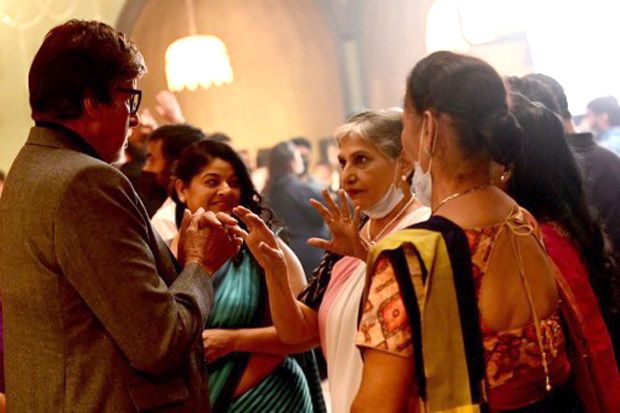 Amitabh Bachchan interacts with aged junior artists, says, “Actors and actresses have come and gone, but they remain in every frame”

“But what has been extremely heartening to the day has been the meeting up with some of the old Junior Artists that have been around much before I even began my journey, and have served consistently since then with the multiple films that I had the good fortune to be in, with them…. indeed a folded hand for them .. they have all aged with time but have remained steadfast to the profession .. simple, humble, loving beings .. in the crowds that stand behind, that mime their conversation , that have never aspired to be in the front .. just satisfied with what they have , film after film after film .. what a life .. many of them may have aspired to be the lead in the film .. to have that speaking part which could open up other doors for them .. but no .. they have remained where they were 45 years ago and still are their, in their confined space .. at times a sad tale of existence .. but them that have been with us have stamped their seals for posterity .. they shall remain where they were, but they shall remain .. Remain .. Actors and actresses have come and gone .. but they remain .. in every frame!” wrote Amitabh Bachchan.

Amitabh Bachchan was last seen in Nagraj Manjule’s Jhund. Currently he has an interesting lineup of films which includes Ayan Mukherji’s Brahmastra which also stars Ranbir Kapoor and Alia Bhatt. Apart from this, Amitabh will be seen next to Ajay Devgn’s Runway 34 and The Intern remake with Deepika Padukone.