Amitabh Bachchan, who is shooting for Project K with Prabhas and Deepika Padukone in Hyderabad, recently visited the production house Vyjayanthi Films. The event may have been low key but the guest list made it a star studded affair with some big names like Prabhas, Amitabh Bachchan, KGF director Prashanth Neel, Dulquer Salmaan, Nani among others posing together for a photograph. While leaving from the event, Amitabh also bumped his Thugs Of Hindostan co-star Aamir Khan. 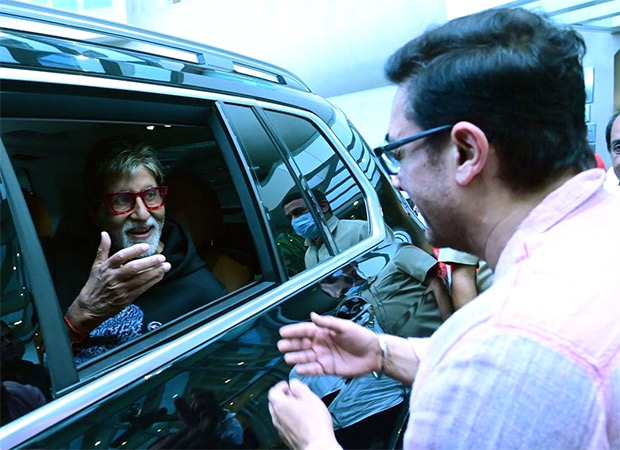 During the grand opening ceremony of a new office in Hyderabad, Vyjayanthi Films invited some big names from the industry for a get-together. While last evening a photo of Amitabh Bachchan posing with Project K co-star Prabhas and its director Nag Ashwin, along with Nani, Dulquer Salmaan, and Salaar and KGF filmmaker Prashanth Neel took the social media by a storm. While leaving from the event in his car, Amitabh revealed that he heard someone knock the window glass of his car, and saw Aamir standing there, greeting him. Posting about how it all unfolded on Instagram, Amitabh shared, “… and as I am about to leave .. a knock on my car window and it’s Aamir .. gosh ! So many legendary friends in one evening ..????????????”

Speaking about Project K, the film is expected to be a bilingual to be directed by Nag Ashwin. The film, which is expected to be mounted on a massive budget worth Rs. 400 crores, will be hitting the big screens in Telugu and Hindi.

On the other hand, talking about Aamir Khan, the actor is gearing up for the release of Forrest Gump remake Laal Singh Chaddha, also starring Kareena Kapoor Khan and Naga Chaitanya in pivotal roles. The film will release on August 11.