American singer Max Schneider, known as MAX, reunited with South Korean group BTS' rapper Suga at the Lakers game this past weekend. After their first meet up in South Korea where MAX had his tour stop, the two of them had met before reuniting in Los Angeles. 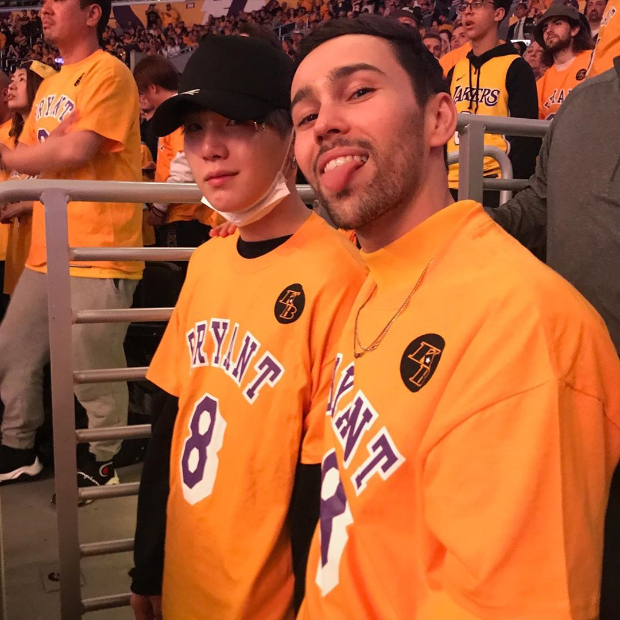 BTS members have been in Los Angeles for the last couple of weeks. Ahead of their album release, they performed at the Grammys 2020 followed by their first performance of their single 'Black Swan' on The Late Late Show With James Corden. While the members are keeping low during their stay in LA, Suga has been out and about meeting artists. He recently met American rapper Logic which seems like a possible collaboration.

MAX went on 102.7 KIIS FM and shared, “I hung with SUGA, who is a massive basketball fan like me, and I loved him so much...I thought we were just gonna meet--and take a picture. But, he had a translator... and it felt like I talked to him for an hour." He also described BTS has "such nice dudes."

On Friday, Suga and Max went to the Lakers game dressed in yellow jerseys in the honour of late Kobe Bryant. Max shared the photograph on his social media handles and with a caption that read, "1ST LAKERS GAME WITH MY BROTHER SUGA. MAMBA FOREVER."

The world is mourning the loss of NBA player Kobe Bryant, his daughter Gianna and all those who passed away in a deadly helicopter. The Lakers played their first game since Bryant's death on Friday, January 31, 2020, at Staples Center. The five-time NBA champion and 18-time All-Star was remembered by everyone at the stadium as the tributes started pouring in.  Two courtside seats had bouquets of red roses with Bryant's yellow No. 24 Lakers jersey on one seat and Gianna's black No. 2 jersey from Mamba Sports Academy pulled over on another seat.

ALSO READ: BTS features alongside Tomorrow x Together and Lee Hyun in Big Hit Entertainment family photos and they are precious