From Deepika Padukone to Shah Rukh Khan, many actors have already visited Rishi Kapoor and Neetu Kapoor who are currently in the U.S. The couple is busy with the veteran actor’s health treatment as mentioned by him last year on social media. The latest celebrities to pay a visit to the actor’s U.S. residence are the Ambanis. Mukesh Ambani and Nita Ambani visited the Kapoors in New York and Neetu Kapoor was more than happy to share about the same. 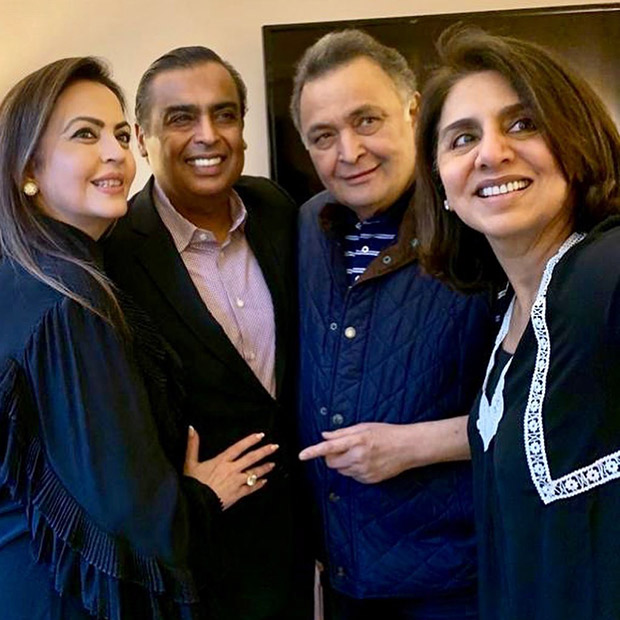 We all know that Neetu Kapoor always likes to post about the many visits that the actors make to meet Rishi Kapoor. This time around too, she shared the same on Instagram saying, “Some pple just come to give you Assurance n Mental peace !!! Thank you mr and mrs Ambani for all the support #love #grateful.” Here’s a look at her post:

Some pple just come to give you Assurance n Mental peace !!! Thank you mr and mrs Ambani for all the support ????????#love #grateful

We all know that the Ambanis and the Kapoors have been friends for long. In fact, during the recent wedding of Akash Ambani and Shloka Mehta, Ranbir Kapoor was not only seen attending the functions and ceremonies but he was also at the forefront of most of them.

Rishi Kapoor took off to the U.S. last year along with wife Neetu Kapoor wherein he stated on his social media post that he is going to the country to undergo health treatment. While he didn’t divulge many details, it was only recently reported that the actor is suffering from cancer. Now we hear that the veteran actor is in the recouping stage and that he will be soon returning to India. The last celebrity, before the Ambanis, who visited him included Vicky Kaushal and Shah Rukh Khan.

Also Read: Ahead of his appearance on David Letterman’s show, Shah Rukh Khan pays a visit to Rishi Kapoor and Neetu Kapoor in New York