Alia Bhatt is currently in United Kingdom shooting for her big Hollywood debut, Heart of Stone. But the actress was thrilled to take a break from the usual schedule this time as she reunited with her in laws family in London. While the city is frequented by Kapoor family, many-a-times, this photo of her reunion with the family seems to have garnered ample special attention. 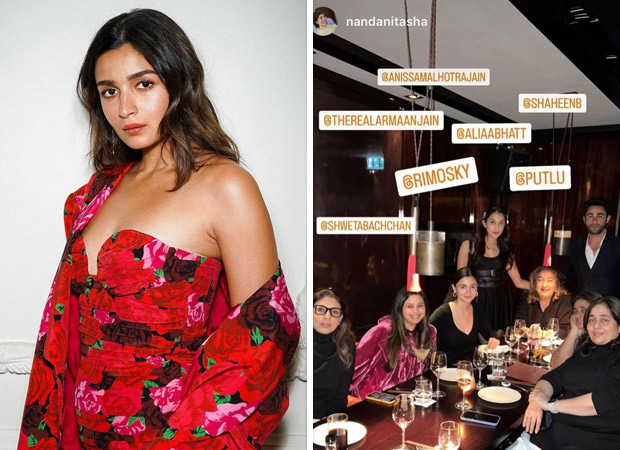 Alia Bhatt meets her in-laws, the Kapoor family in London

The photo surfaced online after fan clubs of Ranbir Kapoor and Alia Bhatt went gaga over the actress meeting her in-laws without husband Ranbir. Interestingly, the latter is also currently in Spain shooting for his next with Shraddha Kapoor. The photo in question featured Alia Bhatt along with her sister Shaheen Bhatt and from the Kapoor family, we had their other daughter-in-law Shweta Bachchan Nanda, Rima Jain and her son Armaan Jain along with his wife Anissa Malhotra Jain as well as Kaajal Anand. It seems that the photo was initially shared by Armaan on his Instagram story.

On the other hand, this post also included a video where we can see Alia Bhatt bonding with her brother-in-law Saif Ali Khan. The video also featured Armaan and Anissa, as all of them were seen enjoying some fun banter with each other. Besides that, the post also featured some older photos of Ranbir and Alia.

Besides her Hollywood debut, newlyweds Ranbir Kapoor and Alia Bhatt will be coming together for the first time on the big screen in Brahmastra. Along with Alia will also be seen in Rocky Aur Rani Ki Prem Kahani, which will be directed by Karan Johar and stars Ranveer Singh as her leading man.