Uttar Pradesh Chief Minister Yogi Adityanath is going all out to build the nation’s biggest film city in Gautam Buddh Nagar in UP. He arrived in Mumbai on December 1 to meet some producers in order to discuss at length about his project. While the meeting with producers is yet to happen, he met superstar Akshay Kumar. 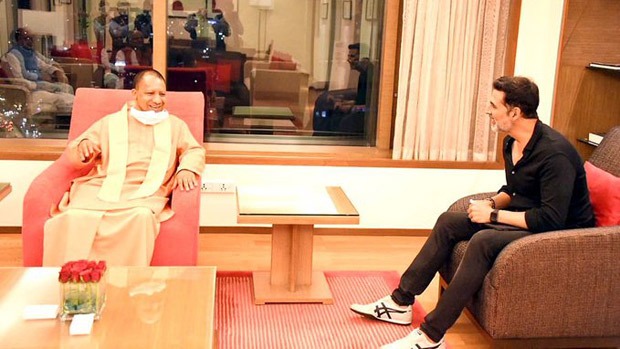 The official handle of the CM tweeted, “Today in Mumbai, I met the popular actor of the Indian film industry, Sh.@akshaykumar. We had meaningful discussions about various aspects of the film world. His understanding, dedication, and constructivism towards his work is inspiring for the youth.”

Earlier, Bollywood Hungama reported, “Akshay Kumar is not just one of the bankable stars in the country but also a producer. He has his own banner Cape Of Good Films. The actor recently announced his ambitious project Ram Setu. We have learnt that he will be discussing the film with CM Yogi Adityanath. Since the film is about keeping the ideals of Lord Ram in the consciousness of all Bharatiyas by building a bridge(setu) that will connect generations to come, he would be discussing more on this topic with the Chief Minister.”

ALSO READ:  Breaking: Akshay Kumar to reunite with Mission Mangal director Jagan Shakti for his next