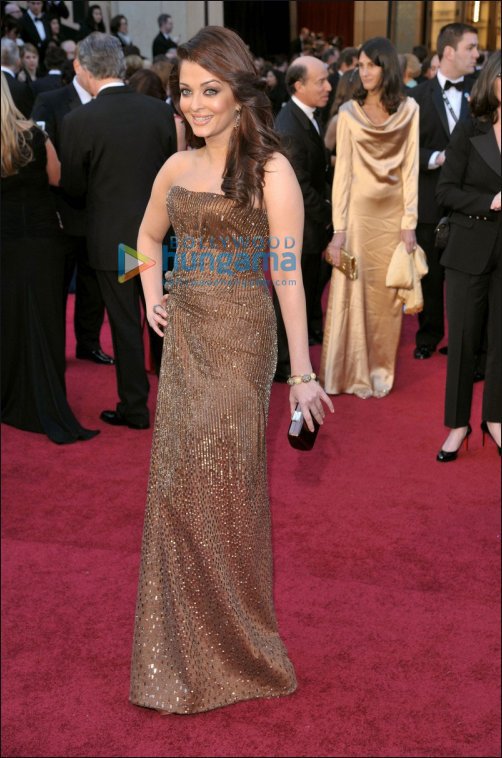 At 6 o'clock this morning, a million alarms went berserk in India that woke up the million Oscar enthusiasts, and their Monday blues came to an end as soon as they switched on their television to watch the 83rd Annual Academy Awards, Live. But on the flip side, what really opened their eyes was the moment they all had least predicted. At the Oscars, India's hottest celebrity couple, Abhishek Bachchan and Aishwarya Rai Bachchan were seen looking bold and beautiful.

Aishwarya Rai Bachchan was wearing a brown gown designed by Armani and Abhishek was seen wearing the Oscar trademark black suit with a bow tie. India's most well known face in Hollywood, Aishwarya quoted, "We were on our holiday in the U.S when we received an invitation to attend the Oscars too. Armani is a dear friend and I had to wear this dress designed by him."

On asking who they found to be on their wish list of winners, Aishwarya Rai Bachchan quoted, "Colin and I are very good friends and we did a film together called The Last Legion. So I am predicting Colin Firth to be my favourite to win the Best Actor Oscar. We have seen the film and I loved it."

Abhishek Bachchan adds an Indian touch too. He said, "My wife and I are representing India. And we are fully going to support A.R. Rahman with whom we both have worked in the past. I hope he wins the Oscars in the two category he is nominated this evening."

All said and done, Mrs. Bachchan's predictions have come true as Colin Firth has won the Best Actor Oscar a few hours ago and the after party will have a lot of chatting and congratulatory messages flowing from Mrs Bachchan to Colin Firth and his The King's Speech team. As for Abhishek Bachchan, he will too have a lot to chat about with the not so lucky this time around, A.R Rahman.