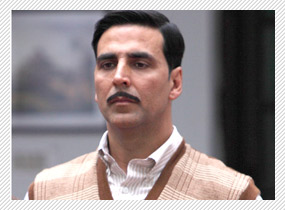 Akshay Kumar recently created a record with his five releases doing a collective business of over 400 crores just in India. However, this isn't the last of the records that he has created. Come February and he would be setting a new record for the maximum number of releases that a top actor has seen in a span of 12 months.

"With the release of Special Chabbis confirmed for February next year, Akshay would now have six releases in 10 months. This is a new record and no other superstar has come even close to such a feat during last one decade at least. Yes, such phenomenon was quite prominent during 70s, 80s and to an extent even 90s when stars used to work in multiple films. However, with most top league stars opting for one, or at maximum two releases a year, Akshay has been an exception", comments an observer.

"Over and above this, he also has Once Upon A Time In Mumbaai 2, Boss and Thuppakki lined up in 2013. This makes it nine releases in two years, a feat that none of the three Khans or other superstars like Ajay Devgn or Hrithik has enjoyed", informs a source.

In that context, he is pretty much competing with his own record that was set around two decades ago. Way back in 1994, he had an astonishing 11 releases in a single year with Elaan, Yeh Dillagi, Jai Kishan, Mohra, Main Khiladi Tu Anari, Ikke Pe Ikka, Amaanat, Suhaag, Zakhmi Dil, Zaalim and Hum Hain Bemisaal releasing month after month.

Tags : Akshay Kumar, Boss, Once Upon A Time In Mumbaai 2, Special Chabbis