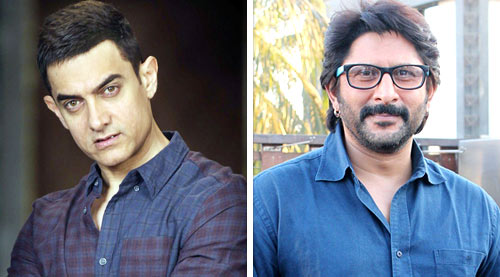 "Aamir is just kidding. He is too big to play Circuit. He's too much of a megastar to play Circuit," said Arshad Warsi while reacting to Aamir Khan's recent statement that he would be keen on playing Circuit in the third installment of Munnabhai. In a long career spanning several noteworthy films, Arshad Warsi is synonymous with Circuit and it is easily the most remembered character essayed by him on celluloid ever.

Vidhu Vinod Chopra had announced that Jolly LLB director Subhash Kapoor will helm the third installment of Munnabhai and then Sanjay Dutt was imprisoned. "The concept and the script of Munnabhai 3 is almost ready. Dialogue and fine tuning is left. We are waiting for Sanju to come out. The moment Sanju is out and ready to shoot, we will be on floor, shooting for Munnabhai," Arshad informed Bollywood Hungama on the sets of Welcome To Karachi in Southampton, UK, recently.

Jolly LLB has won a National Award and the director-actor team will further cement their professional relationship with Guddu Rangeela. "I enjoy working with Subjash Kapoor. God had made one mould, one is Raju Hirani and the second is Subhash. These are directors you can't buy. They are not for sale. Subhash is a brilliant director. His ideology, level of dedication, I like it because I work with the same passion. I'm doing a very serious role in Guddu Rangeela. It's not funny, humorous at all. Amit is bringing in humour in Guddu Rangeela. There is a lot of pain in the film, there's a bit of humour, it's very commercial, there's lots of action, I had a great time shooting for it," said Arshad Warsi.