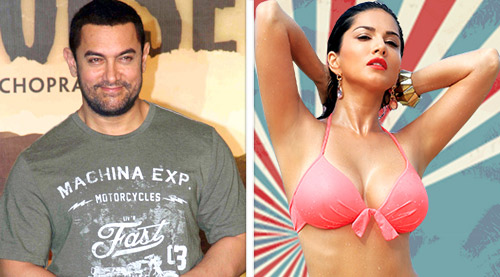 In the past two days, social networking sites and media channels have been buzzing with coverage about the Sunny Leone interview conducted by journalist Bhupendra Chaubey that was all but based on her soon to release film Mastizaade. The interview rather went on the lines of shaming her for her history in the porn business. While almost every lay man came out in support of the actress, Bollywood celebrities who have so far been mum about Sunny's entrance into the industry took to twitter and Facebook supporting her. We at Bollywood Hungama decided to take a look at both sides of the ensuing drama to gain better clarity on the reason Chaubey had to pursue his chosen line of questioning in the interview.

Responding to the interview questions in a matter that quite literally is a slap on the face, Aamir Khan posted on facebook saying, "I think Sunny conducted herself with a lot of grace and dignity in this interview.... I wish I could have said the same about the interviewer. And yes Sunny, I will be happy to work with you. I have absolutely no problems with your "past", as the interviewer puts it. Stay blessed. Cheers."

Sunny Leone on the other hand, maintained her cool and completed her interview. Though she did seem to be getting upset with the question, not once did she blast out.

Not taking too kindly to such a hard line of questioning that bordered on the lines of an interrogation, Bollywood celebrities have come out in support of Sunny Leone who more than answered the presented questions with panache. We list here a few of them:

Anil Kapoor: "@sunnyleone, Kudos to you for being so grateful, poised & courageous in the face of ignorance. I'm a fan :)"

Sushant Singh Rajput: "How beautifully u held your own in that stupid interview @SunnyLeone .Some1 should have taught him how to respect a woman when he was a kid."

Radhika Apte: "Appalled by the journalist and his lack of intellect, humanity and respect. Bravo @SunnyLeone in complete support."

Saqib Saleem: "An all time low for journalism in our country.. Interview done in such bad taste.. Kudos @SunnyLeone for tackling a retard so well".

Richa Chadha: "@bhupendrachaube 'a interview of @SunnyLeone was the most sexist,holier-than-thou one I have seen lately.He wanted you to crack,you DIDN'T!"

Rishi Kapoor: "Very unfair& rude interview with Sunny Leone on CNN IBN.She is taking it on her chin sportingly,obviously in the interest of her coming film"

Alia Bhatt: "That was literally NOT an interview.. Just hyper opinionated statements with a question mark at the end!!! No Grace? Chivalry? Ridiculous!"

Dia Mirza: "He asks the same question for 20minutes. Because she doesn't satisfy him with the response he's looking for.#Respect "

Milap Zaveri: "She is a rockstar! My #MastizaadiSunny Love her!"

Vir Das: "Here's hoping Mr Chaubey's next interview explores something other than his own prejudice"

Mini Mathur: "Yes and such stupid questions!He is so googly eyed & patronising while @SunnyLeone holds her own so beautifully"

Farah Khan: "One's dignity may be assaulted, vandalized and cruelly mocked, but it can never be taken away unless it is surrendered.@SunnyLeone im a fan!"

Shahid Kapoor: "@SunnyLeone respect. Few could have been as composed dignified and classy as you were. ???? you sure showed men it's a woman's world. Boom!"

Mohit Suri: "@SunnyLeone Truly inspired by the grace and dignity you have stood upto to anyone publicly humiliating women in India! Thank you"

Arshad Warsi: "I have become a @SunnyLeone fan after watching her IBN interview... What a graceful & dignified lady."

Genelia Deshmukh: "So disappointed to see such disrespect towards a woman.. Is this Journalism??.I don't know @SunnyLeone personally but what a dignified lady."

Miffed with the interviewer, Sunny Leone's husband Daniel Weber lashed out recently over the kind of negative remarks he directed towards actress saying, "The real issue at hand is basic etiquette. You are speaking to a human being; you are not speaking to a thing. Sunny has a notion like anybody else and to speak down to her is very uncalled for and unprofessional and especially as a journalist. I have to be honest, if your job as a journalist is to be honest you have to report the truth and not come in opinionated. Listen to the facts first. I believe you have a justice to do and a moral obligation to report fairly and not come in with pre-conceived notions of how you want the interview to turn out. That is why people are commenting on it."

Further he also added, "My wife is a true champion. She is more than anybody will know; only I will know of course as we share something different. I have seen that girl fight through the craziest of comments and craziest of negativity faced towards her in her life and I think she has a heart of gold."