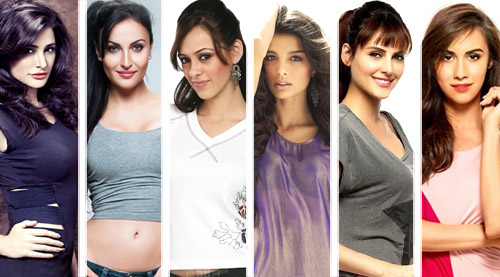 In the past decade or so, Bollywood has seen the influx of several foreigners trying to do Katrina Kaif on the Indian box office, not succeeding the way we thought they would.

The latest is Farah Karimaee from Iran who makes her debut opposite Himesh Reshammiya in Teraa Surroor. Farah bears a noticeable resemblance to the captivating Kaif. Here's looking at the

foreigner ladies who have made an effort to break into Bollywood since Katrina Kaif.


1. Nargis Fakhri: New Yorker of Pakistani origin, Nargis made her high-profile debut in Imtiaz Ali's Rockstar. And fell flat on her fabulous face. Almost reduced herself to a

laughing stock. Nargis later admitted she didn't understand a word of what she was supposed to say and feel in the film. She's still struggling to find her place, though the language continues to


2. Elli Avram: Of Swedish-Greek parentage, Elli has been struggling to make her presence felt in Bollywood for more than five years. She played the lead opposite Manish Paul in Mickey

Virus and opposite Kapil Sharma in Kiss Kiss Ko Pyaar Karoon. Got maximum attention during her stint in Bigg Boss where she caught Salman Khan's attention. But alas, no role


3. Hazel Keech: This British model actress did get a big break opposite Salman Khan in Bodyguard and a hit item song 'Aa ante amlapuram' in a film called Maximum. But

it's only as cricketer Yuvraj Singh's fiancÃ©e that Hazel has acquired some amount of fame in the entertainment business.


4. Giselli Monteiro: Brazilian model with not a word of Hindi or Punjabi in her vocabulary was cast as Punjabi kudi opposite Saif Ali Khan's Sardarji character in Imtiaz Ali's Love Aaj

Kal. It was a major break. But all Giselli could manage thereafter was a whimper of role in Always Kabhi Kabhi. She is now back in Brazil.


5. Mandana Karimi: Iranian like Himesh's Farah Karimaee, Mandana caught the nation's and Salman Khan's attention on Bigg Boss and an embarrassing role opposite Kunal Khemu in

Bhaag Johnny. Like the other foreigner girls, she gets a lot of media attention. But that attention has not yet translated into roles.


6. Lauren Gottlieb: American dancer, known in Bollywood mainly for her splendid moves on the dance floor, Lauren got a big break opposite Varun Dhawan in ABCD 2, a role parallel to

Shraddha Kapoor's. She's also one of the leading ladies with Punjabi superstar Daljit Dosanjh in his new film Ambrasiya. Lauren has made better headway than other firangi girls in