Bollywood would remember 2018 for the awakening of the #MeToo movement. It first shook the foundation American film industry. #MeToo didn’t quite have the same effect on Bollywood. But the overfamiliar attitude of leading men towards actresses and producers slapping young female strugglers’ thighs for effect has stopped. So the scandals of the year… 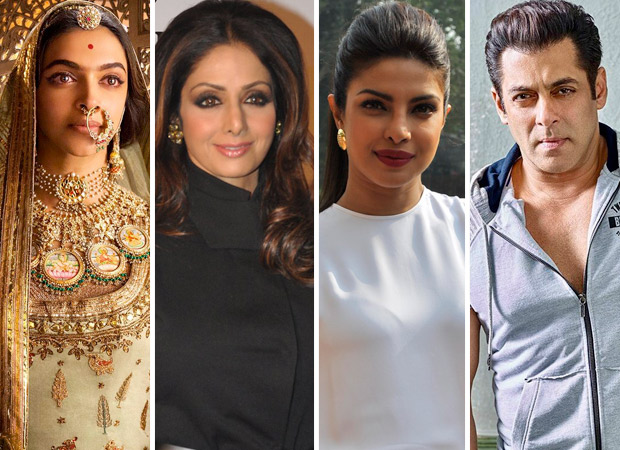 1. Predators Of The #MeToo Movement

From Subhash Ghai to Subhash Kapoor, they fell from grace faster than rose petals from a windswept garden. Harassment-accused Sajid Khan lost his directorial post in the Housefull 4 project. Sanskari actor Alok Nath proved himself a lech. While director Vikas Bahl is still trying to figure out the losses. Look what Tanushree Dutta started!

They threatened to cut off Deepika Padukone’s nose, if the film was released. The film was released under tight security in all Indian states except 3. This writer watched a strictly private screening of the film in Patna. The next day Karni soldiers demanded to know why I was allowed to watch the “banned’ film when in fact the film was not banned in the Bihar state.

The diva’s death in Dubai still remains a puzzle. How did she die? The formal explanations have gaping holes. How can a legend of such spectacular stature be snuffed so suddenly? Is there a God? Or are we dealing with the devil?

Who would dare to walk out of a Salman Khan starrer, and that too after persuading him for the role?  We still don’t know why and how Priyanka got herself into this uncomfortable situation when she turned her back on Salman ’s ambitious film, Bharat. But to take on Salman head-on requires nerves of steels. Our Desi girl proved she has what it takes.

For years, there were whispers of their relationship. But now after her divorce, Malaika Arora (sans Khan) threw all caution to the winds and came out in the open with the new guy in her life. And never mind if Arjun Kapoor is 10 years her junior.

They were together as man & wife for 20 years. Then one fine day…poof! Apparently, Arjun is now dating South African model Gabriella Demetriades. The universe not only moves in mysterious ways, but it also moves fast.

"Jeena Yahan Marna Yahan Iske Siva Jana Kahan"… sang Raj Kapoor in the classic Mera Naam Joker. Little did he know that one day in 2018 his sons, Randhir Kapoor and Rishi Kapoor would announce their decision to sell of Raj Kapoor’s dream and passion the iconic R K Studios. Indeed, the end of an era.

When Irrfan Khan announced his illness, we were shocked. But our shock turned to several other Bollywood names including Sonali Bendre fell prey to the dreaded disease. Let’s hope 2019 brings the healing touch to Bollywood.

The minute this peerless actor expressed his insecurities and fears about the future of his children, a zealous politician offered him a one-way ticket to Karachi. As of now, Naseer is not planning to take up the generous offer. There is the much-unfinished business to look into at home.

Also Read: #2018Recap: Not Salman, Shah Rukh, Aamir Khan..It’s the fourth Khan, Saif, who rocked the most this year, with Taimur’s popularity being sone pe suhaga!