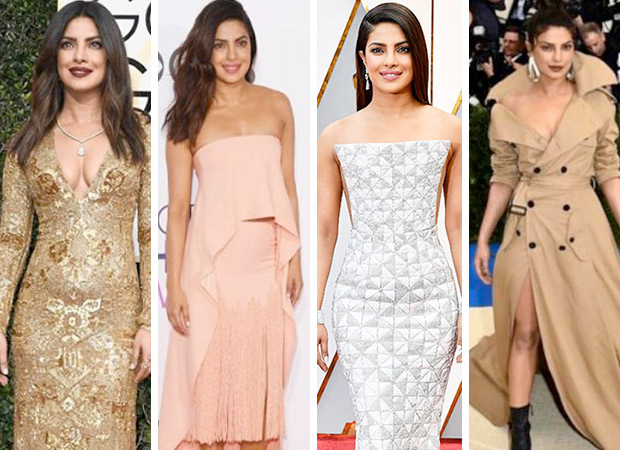 Priyanka Chopra! The global newsmaker of our times, the Desi Girl who’s living the glorious American dream to the hilt! Raking up a storm each time she stepped out, Priyanka Chopra made the West sit up and notice her towering acting prowess coupled with a witty demeanour, an enviable inherent confidence and an undeniable spunk that endeared her endlessly to the global audiences. From embarking on a dreamy Hollywood debut as the baddie Victoria Leeds in Baywatch, serving as a UNICEF Goodwill Ambassador to hobnobbing with the crème la crème at some of the most prestigious red carpets, Priyanka Chopra juggled it all with an affable charm and signature aplomb. We bear no qualms in admitting that her numerous but always on point appearances sent us in an absolute state of frenzy! Bustling with an infectious energy and making stamping her identity with the role of Alex Parrish in the ABC sitcom, Quantico, Priyanka Chopra touched uncharted realms of fame, a feat that can best be summarised as a dream achieved by a few but seldom conceived by all! All along, her style game that can best described as sartorial was largely lapped up by the fashion police and lovers alike.

Priyanka Chopra exhibited an astute understanding of vogues, experimenting with a varied range of colours, cuts, silhouettes, all whilst engaging us consciously. Enlisting the styling precision of famed international famed stylist, Cristina Ehrlich for her international looks and Ami Patel for her looks back in India, Priyanka Chopra has us hooked, booked and how! Here are some of sartorial moments from Priyanka Chopra’s glorious book of style from 2017. 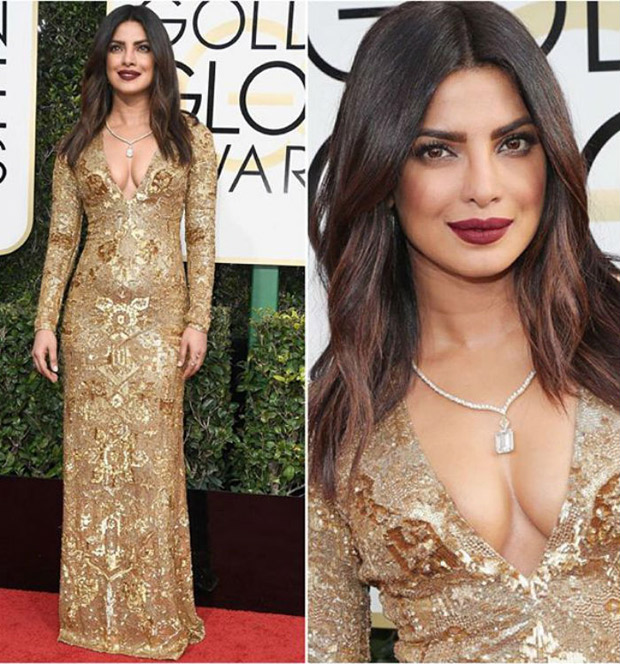 Showing off that toned frame and sparkling in a fitted Ralph Lauren gown that was rumoured to be a result of over 1600 hours of hand embroidery, Priyanka Chopra sashayed on the Golden Globe Awards 2017 red carpet that featured a deep plunge and full sleeves. Oxblood lips and loose tresses were the highlight of Priyanka Chopra’s subtle makeup as the diva indulged in some quirky antics with Sophia Vergera at the Instyle After Awards Party. 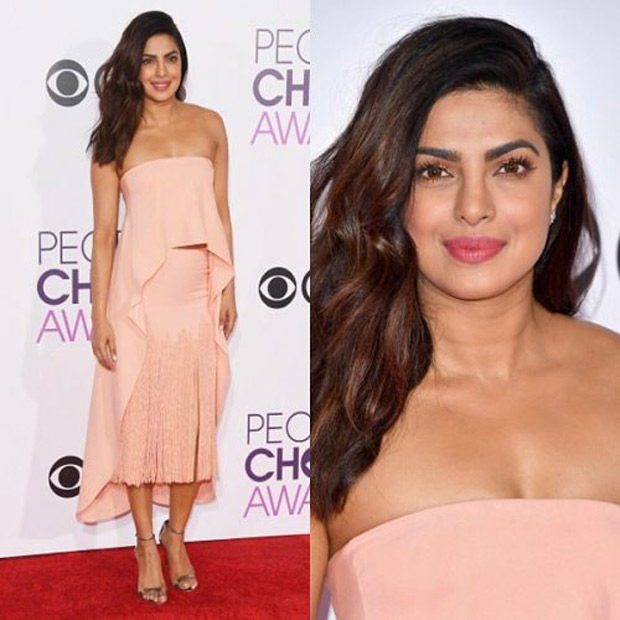 Clinching the People’s Choice Awards 2017 for the Favourite Dramatic TV Actress, Priyanka Chopra toned down and flaunted peachy pink separated featuring a strapless ruffled asymmetric top with a fringe skirt from Sally LaPointe’s Spring 2017 Collection finishing it out with a demure makeup and lissom wavy hair. 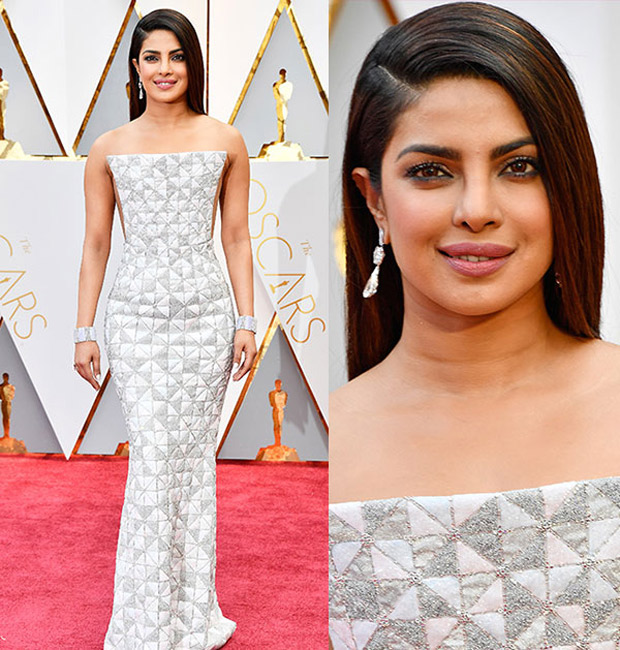 Donning a white strapless Ralph and Russo fitted gown from their Spring 2017 Collection that featured deep side plunges, Priyanka Chopra chose to leave her hair open styled sleek along with well-defined eyes and nude matte lips for the Oscars 2017 red carpet. 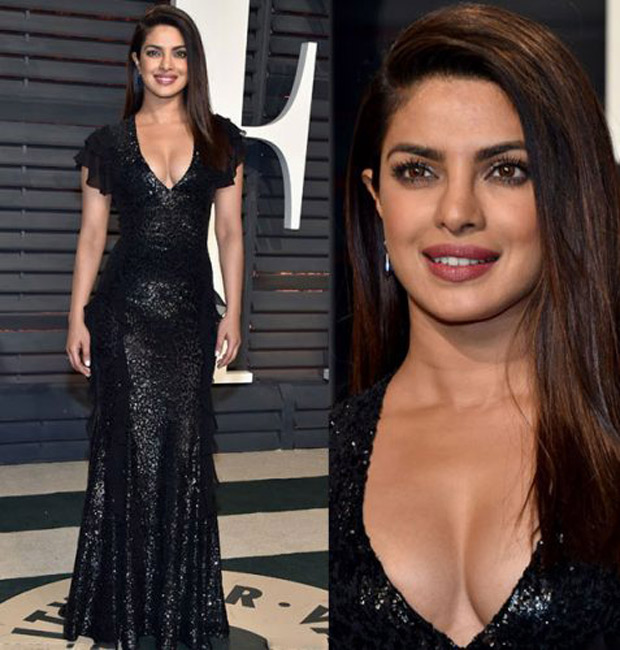 Picking out a black shimmery Michael Kors gown featuring a deep plunge and sheer sleeves, PeeCee acessorized her bold look with jewelry by Lorraine Schwartz and a makeup featuring dramatic eyes and berry matte lips and sleek hair topped off her after-party look at Oscars 2017. 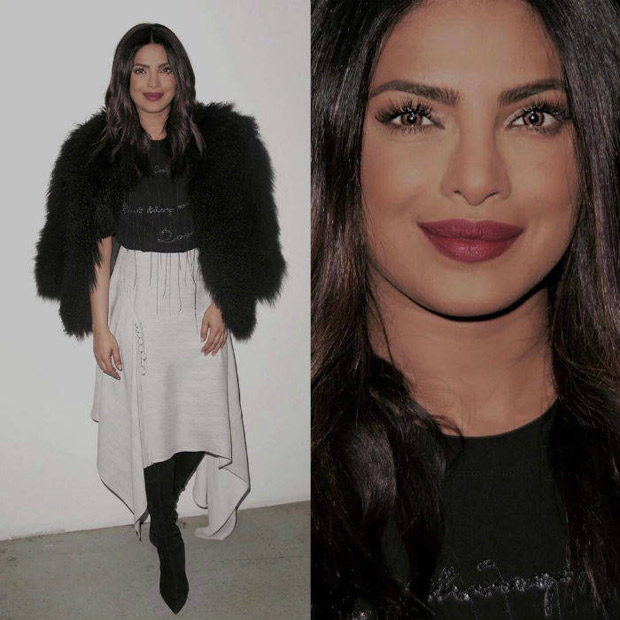 For New York Fashion Week Fall 2017, Priyanka Chopra wore Prabal Gurung separates featuring a shimmery black top and ivory thigh high slit skirt from his Spring 2017 collection for his show. A furry coat blended well as she sported centre-parted loose waves on either side with pink lips that added a dash of color to her monochrome vibe. An earthy makeup with delicately done eyes rounded out the look. 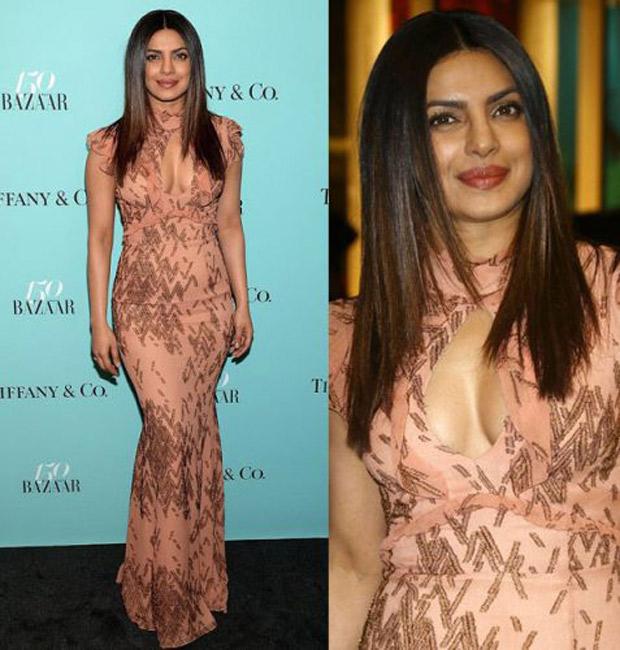 At the Harper’s Bazaar 150th anniversary, Priyanka Chopra was snapped in a blush toned and embellished body hugging gown by J Mendel from their Fall 2017 collection. With the exception of diamond studs from Nirav Modi Jewels, the actress chose a minimal vibe rounding out the look with sleek hair with the signature middle parting and a minimal makeup that comprised smokey eyes, nude and glossy lips, highlighted cheekbones and a radiant smile.

Fiercely feminine and how 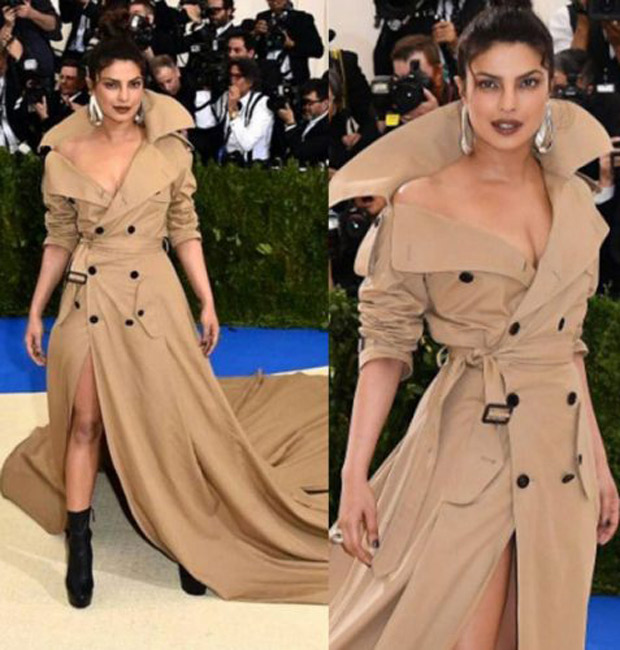 The look that broke the internet, Priyanka Chopra was the cynosure of the global audiences as she pulled off an outrageous trail of her customized Ralph Lauren trench gown, even putting her date Nick Jonas in a fix! With a pair of silver danglers, black calf -high boots, a top knot and matte brown lips rounding up her astonishing look, PeeCee did what she does the best – SLAY! 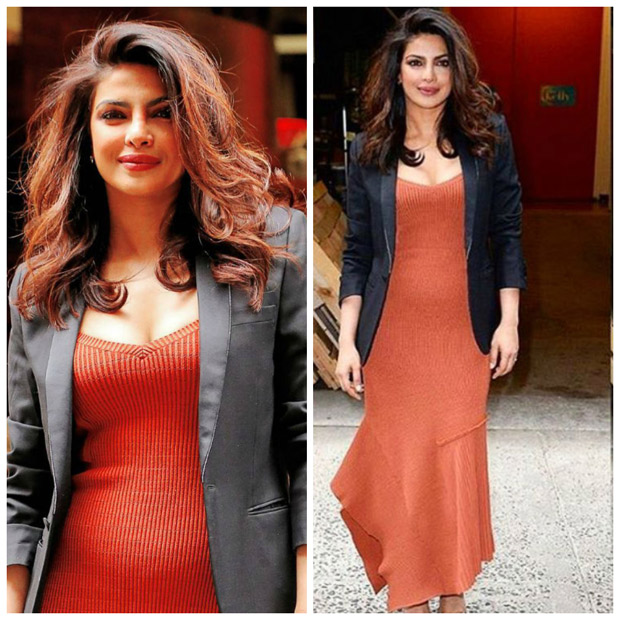 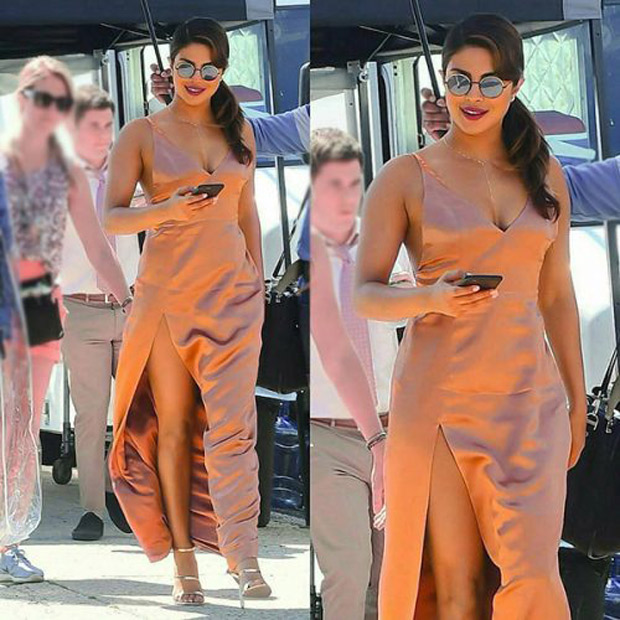 Shooting in NYC for her next Hollywood venture, Isn’t it Romantic, Priyanka Chopra pulled off the tricky satin with an enviable aplomb -a thigh high slit satin dusty pink cami gown, flaunting her toned legs upping the look with a delicate choker, metallic Sophia Webster stilettos, dark lips, shades and a side parted low back ponytail swept on to one side. 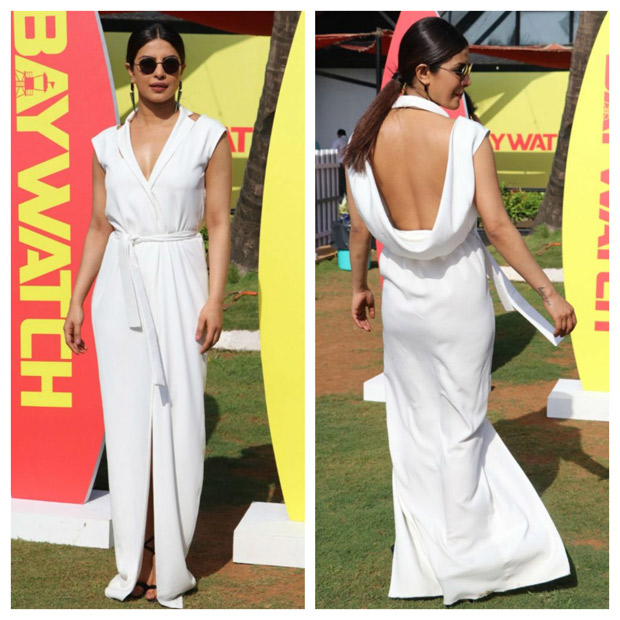 Promoting her Hollywood debut, Baywatch in India, Priyanka Chopra channelled a subtle vibe with a stunning backless gown from Paule Ka rounding out the look with a pair of strappy black sandals from Giuseppe Zanotti, earrings from Outhouse jewellery and a signature middle-parted ponytail. 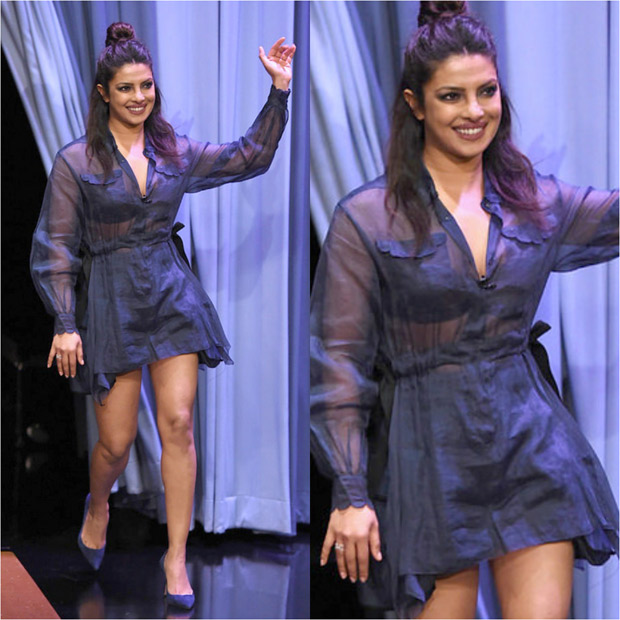 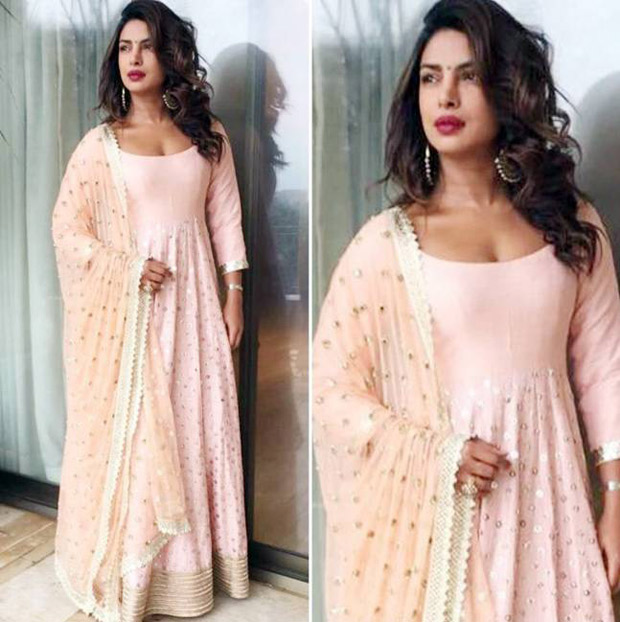 For the Ganesh Chaturthi celebrations hosted by Mukesh Ambani, Priyanka Chopra chose to go desi chic in peachy pink and flaunted an Abhinav Mishra sequined Anarkali with a sheer dupatta rounding out the look with a pair of statement earrings and curls. A dewy makeup with bright lips rounded out her look.

While there are just no two ways about the glaring fact that Priyanka Chopra never goes wrong with her red carpet looks, her off-duty looks too never miss the mark. With a penchant to pull off a look that amazes us endlessly, Priyanka Chopra additionally clinches the Miss. Congeniality awards every single time!