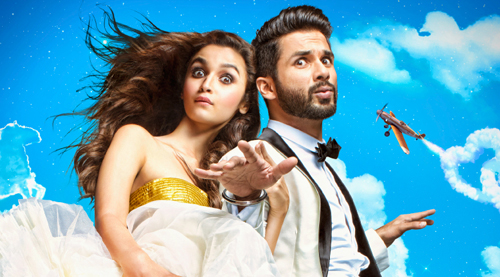 1. Alia is an orphan brought home to an upper-class family by her father Vipin and introduced as a 'anaath'. No one in the large family suspects the obvious. That she's

actually Vipin's illegitimate daughter. The stupidity makes you wonder how the family ever amassed its wealth. The thought always occurred in our minds whenever we saw the sprawling business

families in Barjatya's Hum Aapke Hain Koun and Hum Saath Saath Hai simply eating, binging and celebrating life with corny songs and heaps of calories. When did they ever do any work?

What did they do to deserve this???


2. In Shaandaar, although the stepmother hates her, Alia is adored by her stepsister. This is a straightforward hark-back to Sooraj Barjatya's Vivah where Amrita Rao and her

screen-sister were bonded although mom Seema Biswas frowned till kingdom-come. What made Vikas Bahl think of Vivah? Shahid Kapoor?


4. Karan Johar pops up in Bahl's film to do a rapid-fire quiz with the about to be wedded couple Sanaah Kapoor and Vikas Verma. This was clearly a homage to the pass-the-pillow game in

Reference point being Pankaj's presence in both. Can't imagine any other filmmaker would be inspired by Barjatya's biggest flop.


6. Sanaah Kapoor takes off her wedding finery at the mandap. Remember Sooraj Barjatya's Hum Aapke Hain Koun where Mohnish Bahl's wedding with Madhuri Dixit is recalled from the


7. Shahid flirts with the matriarch of the family Sushma Seth. Remember how Salman flirted with his father's friend's wife Himani Shivpuri in Hum Aapke Hain Koun?

Vivah, where Pankaj Kapoor and Alok Nath were bullied and silenced by their screen wives Himani Shivpuri and Seema Biswas, respectively.


9. In Barjatya's Maine Pyar Kiya, the very wicked business tycoon Ajit Vachchani's daughter Pervin Dastur (where did she go?) piles on to Salman Khan to save her father's business

empire. In Shaandaar, the very dumb Vikas Verma insists on marrying Sanaah Kapoor to save his brother Sanjay Kapoor's business. Same to same.


10. Shahid Kapoor puts the sleepless Alia to sleep, and they both sleep together in the chastest way possible. In Vivah, Shahid nurses his injured wife on her suhaag raat- like

a mother tending to a newly born. It was touching in Sooraj's film to see the lead pair so committed to being celibates under trying circumstances. In Shaandaar, these two hot-blooded