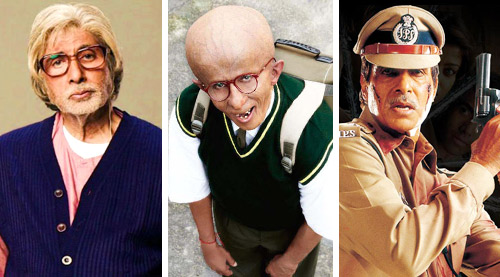 Normally his fans loved him the way he is. And he has made his aversion to beards and get-ups very clear. Nonetheless, Amitabh Bachchan has transformed his look many times. A dekko at films where he changed himself physically.

1. Khuda Gawah: Playing Sridevi's Pathan significant other, Big B sported a turbaned and bearded look every inch the fit-and-furious Pathan. He made the ladies in the Gulf countries sigh and swoon under their veils.


2. Paa: Absolutely and unquestionably unrecognizable as a bald bespectacled Progeria stricken kid. Just this once the trademark beard went.


3. Aakhri Raasta: In a dual role, Amitabh Bachchan chose an elaborate old man's get-up to play the father. Hated the false beard and wig but nonetheless wore them with stoic splendor.


4. Amar Akbar Anthony: Audiences did not allow Big B to experiment with his look much. Here he took that one song break where as a Catholic priest he drove us all into the confessional mode.


5. Mahaan: Trying to look as old as Waheeda Rehman to play her husband, Amitabh Bachchan simply submerged himself in the part while his two sons (2 more Bachchans in a home delivery scheme) remained true to the mega-star trademark looks.


6. Khakee: Since 2000, the beard has never gone. When Big B was asked to play the cop in Raj Kumar Santoshi's film, the actor trimmed the facial hair down to size. The minor change made a major impact on his look for the film.


7. Do Anjaane: In his first film co-starring Rekha, Amitabh Bachchan had to return from the deadâ€¦almost. He had to look unrecognizable to his leading lady who presumes him dead. The beard (which in 1976 was not a part of Big B's appearance) and the glasses did the trick.