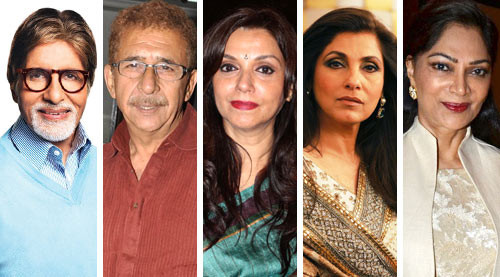 1. Amitabh Bachchan as Anthony Gonzalves: When Manmohan Desai made a film on secular values he naturally called it Amar Akbar Anthony and chose his favourite actor to play Anthony. Big B played the character with a frisky flourish and whiskey swig, drunken monologue, popping out of an Easter egg and wooing the neighbourhood Catholic beauty Jenny with a flamboyance that made the caricature-ish character so distinctly unique. Anthony Gonzalves was the name of music composer Pyarelal's music teacher in Goa. Desai decided to borrow the name and make history.

2. Naseeruddin Shah as Albert Pinto: The question that Saeed Mirza asked, Albert Pinto Ko Gussa Kyon Aata Hai? still holds... The things that make us angry would still make Albert angry. Only Naseeruddin Shah would be so livid and yet hold such an authentic anglo accent in place. Recently the fiasco film My Friend Pinto paid homage to Albert Pinto. Prateik Babbar claimed to be Albert's nephew in the film. If only....

3. Jennifer Kapoor as Violet Stoneham: The heartbreaking Christmas sequence where the trusting old anglo-Indian lady finds out how she has been betrayed remains a high-point in the portrayal of the minority community's isolation. Considered one of the finest performances by a female actor in India, Jennifer Kapoor in Aparna Sen's 36 Chowringee Lane was a lonely old anglo-Indian woman in Kolkata, royally exploited by a young unmarried couple who use her for their own purposes. Without a touch of self-pity, Ms. Kapoor portrayed the desolate woman with such indomitable dignity she epitomized the plight of the whole community. When she lost the National award her enraged husband famously made the statement about awards being given to women for soaping their armpits under municipal taps. Shashi referred to Smita Patil in Chakra. Incidentally the Violet was played by Jennifer and Shashi's daughter Sanjana.

4. Lilette Dubey As Emily Lobo: Anjan Dutta's Bow Barracks Forever an obscure gem of a film where Lilette Dubey was absolutely spot-on. No Violet Stonehem from 36 Chowringhee Lane, Lilette played her alcoholic dysfunctional character with delicious abandon. And yet there's a restrain and dignity in her gait and language, quite like what Shabana Azmi had created in her lonely anglo-Indian character in Anjan Dutt's Bada Din.

5. Lalita Pawar as Mrs D'Sa: Who but Hrishikesh Mukherjee would have the guts to cast Lalita Pawar with her negative image as a benevolent landlady who treats her naÃ¯ve tenant Raj Kapoor as her son? (in Anari) Ms. Pawar won awards for her restrained performance. Decades later, Zohra Sehgal played the same role in Sanjay Bhansali's Saawariya.

7. Simi Garewal as Mary: The prim sexy English teacher in school. Who hasn't gone through that crush? Raj Kapoor's Mera Naam Joker tapped Simi's sophisticated personality better than anyone else. 'Bharat' Manoj Kumar played her boyfriend. He even did a torrid smooch with her. Giggle!

8. Nadira as Margaret: Though the focus in K S Sethumadhan's Julie was on Laxmi who played the title role, it was the fiery Nadira who stole the show with her bravura performance. Playing a protective mother dealing with a pregnant unwed daughter Nadira simply brought the house down. Incidentally Nadira's daughter was played by Sridevi and her husband was played by Om Prakash. He looked as Catholic as Nasir Husain as the priest in Amar Akbar Anthony.

9. Vikram as David: Playing a goofy Goan boozard in Bejoy Nambiar's film (David) the amazing Tamil actor Vikram was so starkly in-character that we were left wondering how he managed to stay on his feet so drunk. That was a staggering performance from an actor who never fails to surprise.

10. Ranjeeta Kaur as Lily Fernandes: Ranjeeta played Ali Macgraw from Erich Segal's Love Story. A spirited, outspoken Catholic girl from the working class. So cute was she that after the release of the film Ankhiyon Ke Jharokhon Se, every college going chap dreamt of marrying a girl with a cross in a chain dangling around her neck.