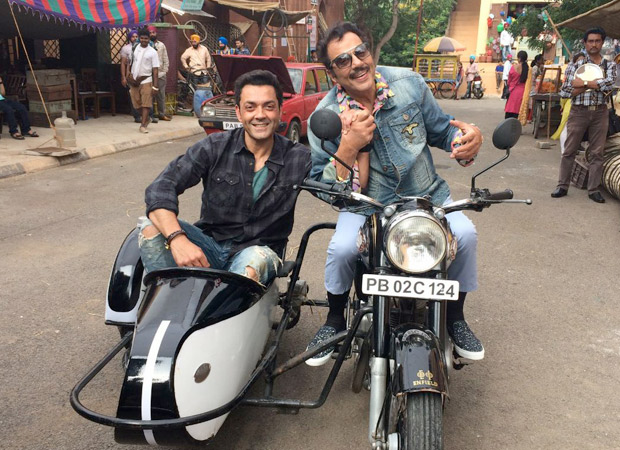 Sunny Deol and brother Bobby Deol are gearing up for the release of Poster Boys, that is releasing next month, on September 8. But, they have quietly started work on Yamla Pagla Deewana 3 without any attention and fanfare. The film went on floors on Thursday, August 10 in Hyderabad.

Navaniat Singh, a well-known Punjabi filmmaker, is the director. Sunny Deol is the producer along with Jayantilal Gada, owner of PEN India Ltd. Sunny Deol, however, hasn’t started shooting for the film. It’s Bobby Deol and Dharmendra who are filming for the film at present and Sunny Deol is expected to join his father and brother soon.

Bobby Deol took to Twitter today in the evening to share a picture from the sets. It features him with his father and both are seated on a scooter with a sidecar. The two-wheeler and the fact that there’s Dharmendra immediately reminds one of the 1975 classic Sholay. “Yamla and Deewana waiting for the Pagla to join ... on set YPD - phir se!!” is the caption along with the picture.

Yamla Pagla Deewana released in 2011 and featured all three from the Deol family. It was directed by Samir Karnik and proved to be a huge hit. The sequel, Yamla Pagla Deewana 2, directed by Sangeeth Sivan released in 2013 and it proved to be a flop at the box office. It remains to be seen if the third instalment manages to succeed at the box office.