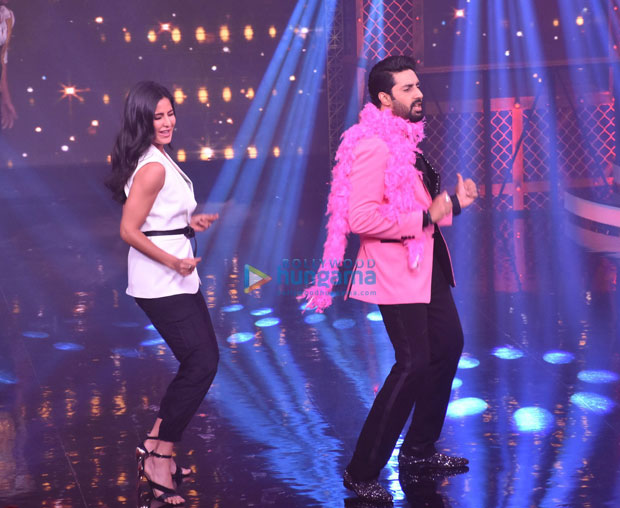 Farah Khan’s new celebrity show ‘Lip Sing Battle’ has seen several stars taking that extra mile and put in efforts to dress up the character as they lip sync and dance on iconic Bollywood songs. From Raveena Tandon turning Anil Kapoor to Tamannaah Bhatia turning Chitti aka Rajinikanth - the robot, the show has seen some great performances. This time around, it is Abhishek Bachchan who will be dancing to the tunes of Katrina Kaif’s chartbusters.

The next episode of ‘Lip Sing Battle’, hosted by Farah Khan, will feature her Happy New Year actors Abhishek Bachchan and Boman Irani. Not just that, they will also have a surprise visitor! The said guest will be none other than Katrina Kaif and the episode in question will be shot today. In fact, Abhishek is said to put up a sexy act wherein he will groove to the popular Kat number, ‘Sheila Ki Jawani’ [Tees Maar Khan – 2010]. Furthermore, we hear that Katrina will be joining him in his performance. Besides this, it has been learnt that a performance on the title track of Dhoom 3 is being planned.

Also arrangements are being made to make finale episode star studded as it will also feature another pair battling it out on stage. The Bareilly Ki Barfi stars Rajkummar Rao and Kriti Sanon are all set to shoot for the finale. Earlier we had reported that, the onscreen pair was supposed to shoot for the show last week. However, owing to a fracture that Rao suffered on the sets of the reality show, he had to delay the shoot. The pair was later replaced by South-Bollywood actress Tamannaah Bhatia and cricketer Irfan Khan.

Now, Rajkummar Rao has undergone a surgery for his leg and will be seen performing on a wheelchair. The actor, who is also busy with the promotions of his film Shaadi Mein Zaroor Aana, has already started rehearsals for the show.