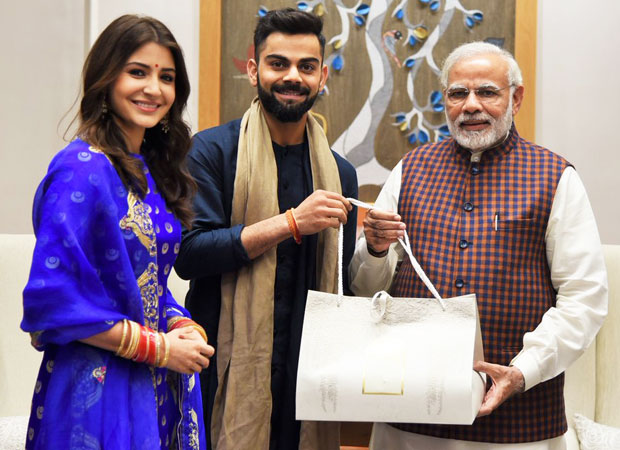 Virat Kohli and Anushka Sharma got married in a not-so-secret marriage ceremony held in Italy on December 11 last week. There were already murmurs going around that both might get hitched while in Italy. But nobody knew for sure the exact date and time of the ‘shaadi’. As a result, everyone was left slightly taken aback when it was finally unveiled that the lovers have indeed tied the knot. In no time, the news and the lovely pictures and videos from the marriage ceremony spread like wild fire. The craze was so much that it can be hailed as the marriage of the decade!

Even after almost 10 days, Virat Kohli and Anushka Sharma are still making news. Today, both met the Prime Minister Narendra Modi in Delhi and this is the picture that has now become the new talking point. It features Anushka looking ravishing in a blue dress while Virat looks dapper as always in his dark blue kurta. Both are giving their wedding reception invite to Narendra Modi, who also seems happy to accept it. The picture was uploaded by the official Twitter handle of PMO India along with the text, “Captain of the Indian cricket team @imVkohli and noted actor @AnushkaSharma met PM @narendramodi this evening. The Prime Minister congratulated them on their wedding”.

As per reports, Virat Kohli and Anushka Sharma will have a grand wedding reception tomorrow in Delhi and on December 26, they’ll have a reception in Mumbai.