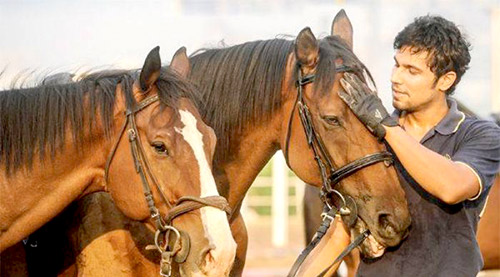 We are all aware of Randeep Hooda's fondness towards horses. Not only has he time and again expressed his desire towards promoting horse riding as a sport but the actor has also adopted some of them previously. And now, when he received the news about ailing horses in Matheran, the actor immediately took off to the hill station to help them.

From what we hear, it is one of the members of Mahalaxmi riders club (Mumbai) and former wife of Farhan Akhtar, Adhuna Bhabani who messaged Randeep about the condition of horses in Matheran. Apparently the stylist sent him a video, or rather a plea to save these horses from the ill treatment they are being subjected to in Matheran. For the uninitiated, horses are the only mode of transport in this hill station besides a toy train. However due to the derailment of the toy train, it is currently shut because of which horses are made to carry gunny bags, gas cylinders etc. Considering that the video of this torture went viral on social media, Randeep and his friends (another club member Adil Gandhi and his son Riyaad) couldn't meet up with those severely injured horses that had disappeared. However, Roxanne, who runs an animal shelter in Matheran, was kind enough to help them meet some of the horses who were less injured. Randeep added that whilst they were glad to help these animals by giving them appropriate medication, they also left some behind for others in case of need.

Randeep Hood continues to fight for animal rights and stated that this move was to put pressure on authorities. He further also mentioned about the inclination shown by a few animal lovers from Pune and NGOs from Delhi who have decided to come out in support against animal cruelty.