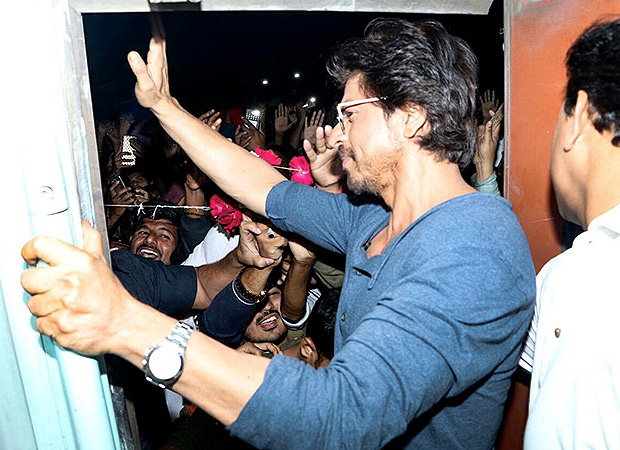 A few days back, as a part of the film promotions of Raees, Shah Rukh Khan, Sunny Leone and others had taken a ‘train trip’ from Mumbai to New Delhi when they travelled by ‘August Kranti Express’. When the train halted at Vadodara station, there was unprecedented crowd who had turned up to get a glimpse of their favourite stars. Readers may also know that, we had reported about a man losing his life amidst the chaos.

Recently, a case was filed against Shah Rukh Khan for allegedly damaging the property at Kota Railway Station while promoting Raees (which was directed by Rahul Dholakia and had the Pakistani actress Mahira Khan as the lead heroine). The said case, which got filed by a vendor named Vikram Singh at the Kota station, got registered against Shah Rukh Khan yesterday by the GRP on the direction of a railway court.

In his complaint, Vikram Singh allegedly mentioned that, whilst standing at the gate of ‘August Kranti Rajdhani Express’, Shah Rukh Khan threw something at the public, who rushed to grab it. This led to a chaos like situation, which further got developed into a scuffle. All of this (allegedly) resulted in Vikram Singh’s trolley being overturned and damaging the items and injuring him in the bargain. Based on Vikram Singh’s complaint, a case has been registered against Shah Rukh Khan under the IPC sections 427 (mischief causing damage to the amount of Rs 50), 120(b) (criminal conspiracy), 147 (rioting), 149 (every member of unlawful assembly guilty of offence committed) and 160 (committing affray) of IPC. Under sections 145 (nuisance) and 146 (obstructing railway servant in his duties) of Railway Act, and section 3 (mischief causing damage to public property) of the Prevention of Damage to Public Property Act, he said.

While the reports state that a detailed investigation into the matter has been initiated, you watch this space for developments.