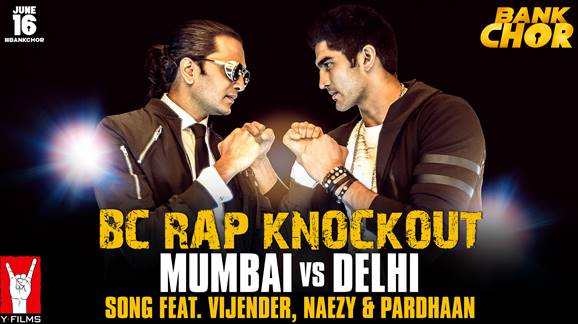 If the trailer and campaign of Bank Chor is crazy, the songs are even more mental.  After an item song featuring three men titled ‘Hum Hain Bankchor’, a song that’s an ode to the ‘bum’ (‘Tashreef’) and worst of all, a Baba Sehgal song (‘Bae, Baba aur Bank Chor’), the Bank Chors have now taken on the globally popular format of the ‘epic rap battle’ with a new song called BC Rap Knockout: Mumbai vs Delhi.

The rap battle is a one-of-its-kind musical bout between two sides, and the Bank Chors have cashed in on the age-old rivalry of India’s two most loved cities, Mumbai and Delhi, for it. But where Riteish Deshmukh, who plays Marathi Manoos Champak Chiplunkar in the movie, leads the Mumbai side in the rap-off, the Delhi side is led by India’s Olympic medal-winning boxer Vijender Singh himself, in a special ‘knockout’ appearance, making the song officially the coolest thing about the movie.

Much like the punches he exchanges in the boxing ring, Vijender has traded rap punches on the song, delivered to the voice of underground desi rapper Pardhaan, while Riteish’s voice is given by the original Mumbai gully rapper, Naezy. Both rappers are managed and repped by One Digital Entertainment, which collaborated with Y-Films on this special track.

Given the fact that there is no actual answer to the Mumbai vs Delhi argument that’s been going on for centuries between people of both cities as everyone knows Mumbai is better (although Delhi is the best), composer Shameer Tandon and lyricist Varun Likhate had a blast working on the song too – giving each side enough ammunition for Vijender and Riteish to have the time of their lives in the epic face-off in the music video.

The song also ties back to an ongoing gag in Bank Chor where Champak (a Mumbaikar) trades insults with his sidekicks Genda and Gulab (who are both from NCR) about which city is better. Whether anyone wins or everyone loses, check out the song and decide for yourself! (A longer version of the same song will be released at the end of the week, so you are free to decide again then too.)

Says Vijender, "It was great fun for me to go head-to-head with Riteish on this song because of the 'epic rap battle' format. I am used to throwing punches in the ring, so this was like a musical bout, where I was throwing barbs at Riteish. I was proud to represent Delhi in this battle, and hope people take it in the same spirit we made it."

Adds Riteish Deshmukh, “If there’s one thing I’ve actually loved about doing Bank Chor, it is that I play a Marathi Manoos in it, who’s an out-and-out Mumbaikar. This song is special to me for the same reason – I got to represent my city, the city of dreams, Mumbai! And as they say, agar Dilli Dilwalon ki hai, toh Mumbai sabki!”

Says composer Shameer Tandon, “I have had a fantastic relationship with Y-Films on several songs, and each time, we end up doing something even madder together. This song, being India’s first epic rap battle, was another crazy journey for me, since two of India’s coolest rappers Naezy and Pardhaan have sung on it. Hope not just Delhi or Mumbai, but the whole country enjoys our rap knockout!”

Self-confessedly India’s STUPIDEST comic thriller, Bank Chor, directed by Bumpy and produced by Ashish Patil, is all set to embarrass its makers when it releases in theatres on June 16.