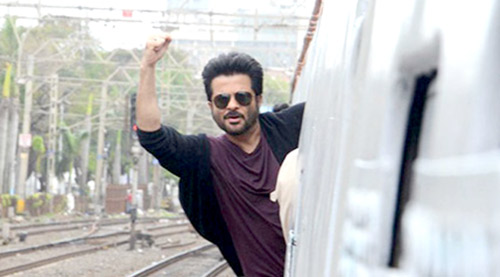 Anil Kapoor's last promotional event of '24' seems to have dragged the actor in a sort of legal trouble. After western railway issued a notice, an NGO has filed a complaint against the actor turned producer for the train ride.

Earlier we had reported that Anil Kapoor boarded a train from Churchgate station to Borivali as a part of the promotional campaign of his upcoming series '24'. But this landed the actor in a soup after pictures of him enjoying the ride on the footboard went viral. Western Railway raised an objection over the same stating that the actor did not follow the terms and conditions related to safety measures thereby encouraging the younger generation to do dangerous stunts.

And now, Sahas Foundation president Sayed Furqan Ahmed has filed complaint along with Railway Police Commissioner Niket Kaushik against the actor under the Indian Railways act. He claimed that Anil, being one of the youth icons, behaved irresponsibly by insulting the rules and regulations of Railways and also demanded an apology from the actor not only to the railways but also the youngsters who lost their lives. Ahmed further alleged that Anil inspired several to imitate him by leaning out of the train which has been a menace and has been causing deaths for several years.

Anil Kapoor, who was last seen in Welcome Back, has been busy wrapping up the much awaited second season of the crime thriller series '24' and recently kick started the promotions for the same.