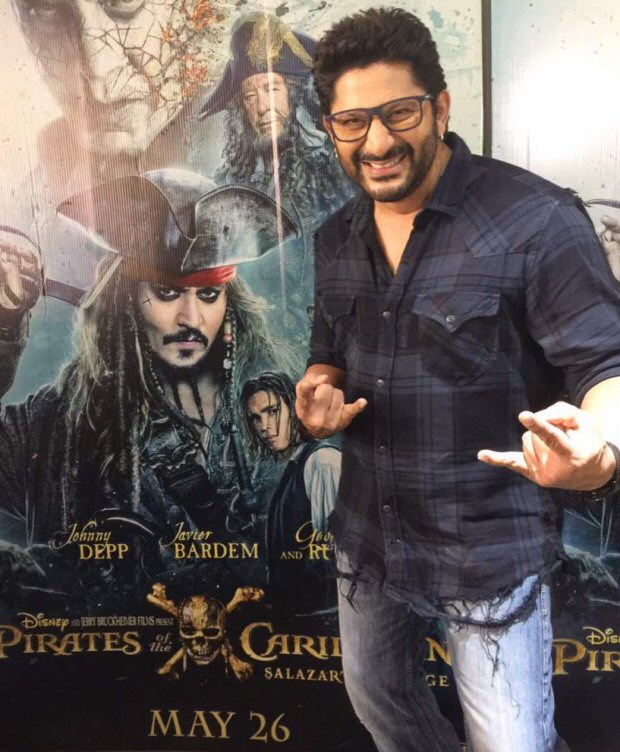 While he is working on Golmaal Again, Arshad Warsi's latest parallel gig is very interesting. The actor has been roped in to dub for Hindi version of upcoming Hollywood fantasy film, Pirates of the Caribbean: Salazar's Revenge.

Arshad Warsi himself confirmed the news on saying that he is the voice for Hollywood actor Johnny Depp's popular character Captain Jack Sparrow. Posing in front of the film's poster, he captioned it as, "So yes, I am the voice for Jack Sparrow in #piratesofthecaribbean5  watch it, you'll love it."

Speaking about the dubbing experience, Arshad Warsi said that he has always been very fond of this character. He really likes Jack Sparrow. The moment he had watched the film Pirates of the Caribbean, he was a fan of the character. It was a major challenge to do as it was not easy to dub Johnny Depp. It was a challenge to do the scenes where Jack Sparrow was drunk but he had a lot of fun.

Johnny Depp is returning with the fifth installment of the popular Pirates of the Caribbean franchise. It will be released in India on May 26. Meanwhile, Arshad Warsi is busy filming Rohit Shetty's Golmaal Again. It is set for Diwali 2017 release.