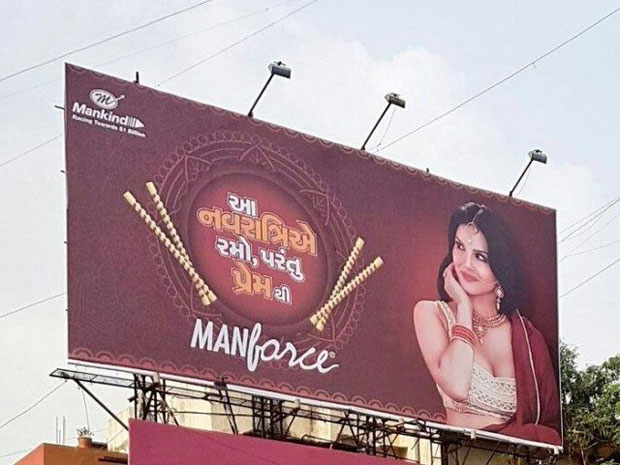 The Navratri-themed promotional hoarding of Manforce condoms, featuring Sunny Leone, across Gujarat has led to a lot of brouhaha. The hoardings with the message ‘Aa Navratriey Ramo, Parantu Prem Thhi’ (This Navratri, play but with love) were aimed at encouraging youths to use condoms, manufactured by Mankind Pharma, during the festival. However, it didn’t go down well with majority of the people and protests erupted over it in Surat.

And now, Mankind Pharma has pulled down close almost 500 of these controversial hoardings. This was done after a traders’ body, Confederation of All India Traders (CAIT), protested sharply against the message in the ad. This traders’ body has even written to the Minister of Information and Broadcasting Smriti Irani and urged that celebrities who endorse brands should be made accountable for advertisements featuring them.

CAIT secretary general Praveen Khandelwal said that Navratri is a festival that celebrates the strength of a woman. It’s shocking that a brand time its condom commercial around the festival.

Meanwhile, National Medicos Organisation (NMO), which is affiliated to RSS, had called for a boycott of Mankind Pharma’s medicines and other products. They asked the 5,000 doctors affiliated to them that they should not prescribe the medicines of Mankind Pharma. NMO chief Dr Prakash Kurmi said that Mankind’s medicines are cheaper and its field officers share a good relationship with the doctors. But with the Navratri ad, they have crossed their limits and since they hurt the religious sentiments, the NMO has boycotted their products.

After withdrawing the controversial ad, Mankind Pharma tweeted, “Navratri hoardings campaign was not meant to hurt anyone's sentiments and was immediately withdrawn. We deeply regret any such incident”. Now that they have pulled down the hoardings as well, looks like it will be the end of all controversies for this pharma brand.