Denise Jonas AKA Mama Jonas is one happy woman, since her youngest son Nick Jonas has found the LOVE OF HIS LIFE in Bollywood actress, global icon and former beauty queen Priyanka Chopra. The two got married in a world class ceremony at the Umaid Bhavan palace in Jodhpur, Rajasthan. The pictures and videos out from the venue give us an idea of how grand and royal the ceremony must be! After getting married in both Indian and western style, Priyanka Chopra threw a lavish party in Delhi for friends and associates who were not invited for the shaadi. 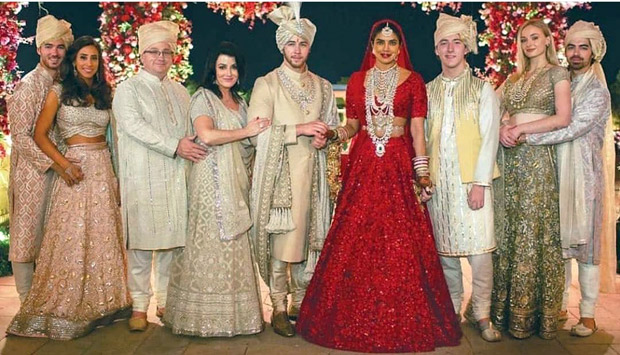 Post this, PC appeared on the Vogue US cover, becoming the first Indian woman to do so. She indeed is in the happiest phase of her life. Her mother in law Denise took to Instagram and beautifully made her feel included in her family. She wrote, “Welcome Mrs. Jonas!! My heart overflows with joy & love for the 2 of you. God only has the best ahead of you. A lifetime of love, a journey of togetherness, I love you, Mom.” Priyanka also changed her name to Priyanka Chopra Jonas after her wedding to Nick.

Joe Jonas who appeared on Today had such nice things to say about Priyanka and Joe. He said, “Marrying Nick off to Priyanka has just been fantastic. Obviously, this has been one of the most beautiful weddings I’ve ever seen and to be part of it was a dream.” He also spoke about how difficult it was for him to hold back his tears while he was toasting to Nick. He said, “I kinda blacked out for a minute. I was just overwhelmed with emotion. This is my brother, my best friend and to see him marrying his dream girl … there were a lot of tears the whole weekend — and a lot of smiles. I had (the toast) on paper, so that was the most important part.”

Priyanka and Nick are currently in Mumbai. Nick has been planning a surprise honeymoon for his lady love after she wraps her work and takes a break to ring in Christmas and New Year.