Poster of Sara Ali Khan and Sushant Singh Rajput's movie Kedarnath is finally out and it is all sorts of interesting. The movie will release on December 7 before Ranveer Singh's Simmba which is coming out in the same month on 28th. Teaser of the movie will be out on 12 pm, Tuesday. The poster of Kedarnath shows Sushant Singh Rajput carrying Sara along the treacherous mountain ranges. The movie revolves around a love story between the leads against the backdrop of Uttarakhand floods. Sushant is playing a Pithoo, who is a tourist guide while Sara is the pilgrim. Set on a 14km pilgrimage from Gauri Kund to Kedarnath ( the 2000 year old temple of Lord shiva ), this is a lovestory between Mansoor and Mukku played by Sushant Singh Rajput and Sara Ali Khan respectively.

Mansoor, a reserved and reticent Pithoo ( porter ) who lives with his widowed mother, in a hamlet called Rambara helps pilgrims make an arduous journey upwards to the temple town. His world goes into a tailspin as he encounters the beautiful and rebellious Mukku who sucks him into a whirlwind of intense love. The mountain tsunami that wrecked the temple town in the June of 2013 leaving more than a hundred thousand dead sets the backdrop for this epic love story. Kedarnath marks the debut of Sara Ali Khan, the film also presents the second association of Abhishek Kapoor with Ronnie Screwvala along Sushant Singh Rajput after Kai Po Che. Produced by Ronnie Screwvala's RSVP and Abhishek Kapoor's Guy In the Sky Pictures, Kedarnath is directed by Abhishek Kapoor and is slated to release on 7th December 2018. 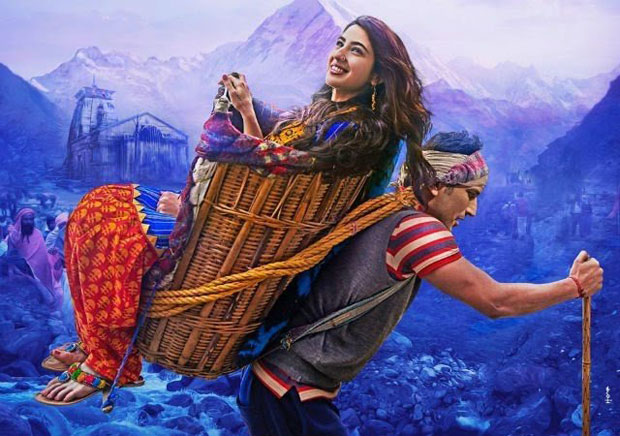 Because, it was uncertain as to when the film will see the light of the day, Sara Ali Khan signed another film, Rohit Shetty's Simmba. She therefore will be seen in two back to back movies in December. She is currently shooting for Simmba with Ranveer Singh and is all piqued to make a debut with Abhishek Kapoor's Kedarnath, as planned anyway. Check out the movie poster below and tell us what you feel.

Apart from shooting back to back for these two films, Sara was in the news for making her Koffee With Karan debut soon. She will be seen with her dad Saif Ali Khan as they sip steaming coffee on Karan's couch. It is raining debuts for Sara and it sure must be an exciting time for her.