After a long time, Karan Johar announced a glamorous yet unconventional multi-starrer and that too, a period drama last year. The casting of the film, however, took everyone by a surprise, when Madhuri Dixit came on board to feature opposite Sanjay Dutt after two decades after the untimely demise of Sridevi. Kalank also stars actresses like Alia Bhatt and Sonakshi Sinha in major roles. Now, news has it that Alia Bhatt and Madhuri Dixit will put up a grand Kathak performance in the film together. 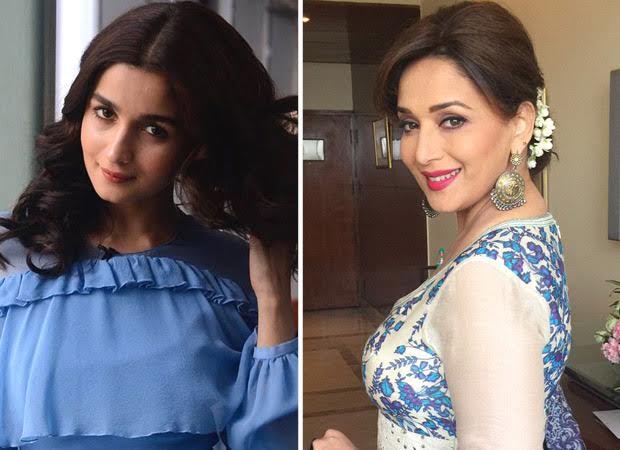 We had earlier stated that Madhuri Dixit is reuniting with her favourite Bollywood choreographer Saroj Khan for this film. Accompanying them is also Remo D’Souza and the duo together choreographed for the actress for a major dance sequence in the film. Now adding to it, is a Kathak performance that is much awaited considering that Madhuri and Alia will share screen space for the first time.

While it is a known fact that Madhuri is a trained dancer, especially in Kathak, Alia Bhatt will have to undergo training for the same. Although the actress has already been learning the dance form for the past one year but we hear the training for the past two and half months were the toughest. It seems that learning this for the film was very integral for the role she is playing and hence, keeping in mind the same, the actress decided to dedicate as much time as possible for the dance form. It is also being said that Alia received a chance to learn Kathak from the famous Pandit Birju Maharaj, who has also been Madhuri’s guru.

Coming back to the song, that will feature the duo, even though the makers haven’t revealed many details about the same, it has been learnt that it will be classical song that will represent the era that the film is set in.

Kalank also stars Varun Dhawan as Alia’s leading man and Aditya Roy Kapur is paired opposite Sonakshi Sinha. The film is also expected to feature Kiara Advani, Kunal Kemmu in prominent roles and is slated to release on April 19 next year.