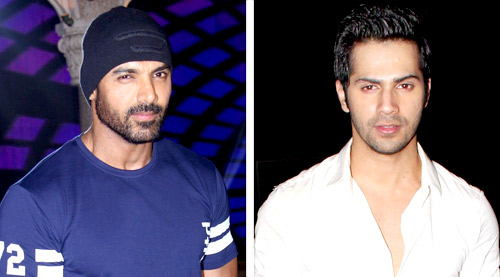 The protective Big Brother instincts in John Abraham have bubbled to the surface. While shooting with Varun Dhawan in Rohit Dhawan's Dishoom John not only looked out for himself he also made sure Varun was safe during the action sequences.

Confirming his desire to protect the younger actor from danger John says, "Yes, I was there to look out for Varun. He was new to doing action. I thought it was prudent of me to be around to check the harness, etc, to see he was okay. This was the first time Varun was doing action. And we had to make sure he was well-protected."

John sees a sense of continuity in the way he felt towards Varun. "There is a role-reversal here. I was the little brother for Akshay Kumar in Garam Masala and I am the big brother for Varun in Dishoom. It's lovely. Varun and I share a very real very honest relationship."

Not that John hugs Varun every five minutes to prove his brotherly affections.

John reveals, "It's very unspoken. Varun and I are very comfortable with one another. He knows I am not the hug-and-cuddle tu-toh-meri-jaan-hai types. But I am always there to look out for Varun. I keep telling him to keep his head on his shoulder in spite of the stardom. Luckily he's grounded. He's a good boy. I am very secure in my space. That's why Varun likes being around me."

The two of them have apportioned their duties to market Dishoom. "Varun and I know where to go. The other day I was shooting all night for an action scene in Force 2. So I told Varun to go alone to a restaurant for an Iftaar event. There are dance reality shows where with his jiving skills Varun is the man. I am the odd one out. I tell Varun to go on them while I promote elsewhere. That kind of camaraderie helps to make the on-screen partnership look convincing. I hope that sibling chemistry between us shows up in the film."