The Hrithik Roshan starrer, Super 30 is all set to re-release in Regal Virginia Centre and Regal Countryside, Virginia, USA. The film was recently released in the Netherlands and is now travelling to USA to inspire more and more people. The film was originally released in 2019 in India and received immense appreciation from the audience and critics for such an inspirational film. 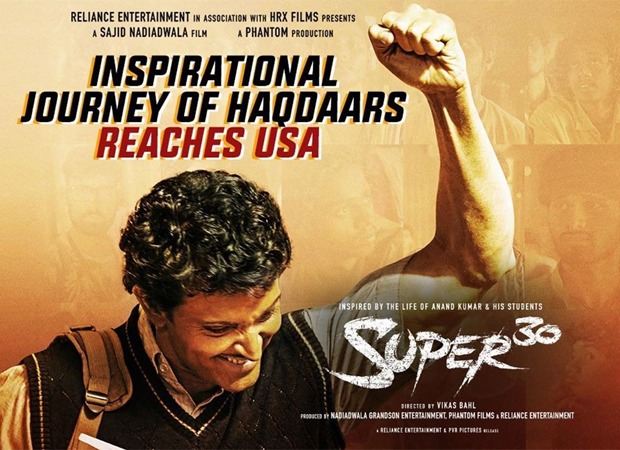 Hrithik Roshan starrer Super 30 to re-release in the USA

Super 30 is inspired by the life of mathematics educator Anand Kumar film and his highly ambitious educational program in the name Super 30. Hrithik Roshan exhibits the role of Anand Kumar to the T, his performance was remarkable and he revived overwhelming response from the critics and the audiences.

A post shared by Reliance Entertainment (@reliance.entertainment) on Aug 28, 2020 at 2:48am PDT

The love and appreciation that Super 30 has received is heartwarming, just like how it is is leaving an undisturbed mark on the globe and inspiring thousands of people. Be it his makeup or his accent or just his versatility and dedication towards his role, Hrithik as Anand Kumar blew everyone’s mind with his impactful performance. We are definite thy Super 30 will win accolades from the USA audiences when it releases there on this 28th August.

Also Read: Virat Kohli’s most admirable person during his childhood was Hrithik Roshan