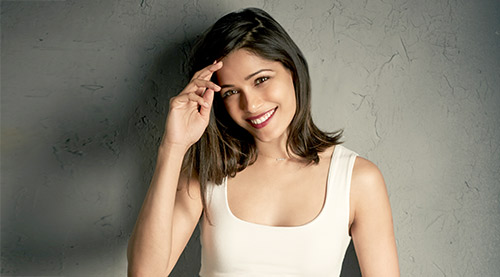 Frieda Pinto, who rose to fame starring in the Oscar-winning film Slumdog Millionaire, will be receiving a prestigious award from the Indian film fraternity.

Frieda Pinto will be attending the IIFA 2016 in Spain to receive an International Icon award. Since her debut in Hollywood with Slumdog Millionaire, Frieda Pinto has become one of the most successful Indian talents abroad. She has worked with big names like Christian Bale, Bruno Mars, James Franco, Woody Allen and others. IIFA wanted to honour Frieda Pinto to celebrate her international career. Apart from being an actress, Frieda has also been a fashion icon.

IIFA 2016 will have some grand performances and will be hosted by Shahid Kapoor and Farhan Akhtar. This would be the first time Frieda Pinto will be making an appaearance in an Indian award show. After IIFA 2016 appearance, Frieda Pinto will be flying to Monrovia to join the first lady of United States of America Michelle Obama in a campaign for her Let Girls Learn campaign.