Mrunal Thakur has had a great year in 2019. Both her releases, Vikas Bahl’s Super 30 opposite Hrithik Roshan and Nikkhil Advani’s Batla House opposite John Abraham were acclaimed hits. She has also acted in this year's in Karan Johar's anthology Ghost Stories on a digital platform and will be seen next in Jersey opposite Shahid Kapoor and Rakeysh Omprakash Mehra's Toofan opposite Farhan Akhtar. Now, we have heard that the talented actress is in advanced talks to play the female lead in Ranjit Tiwari’s detective thriller Bell Bottom, opposite Akshay Kumar. If all goes well, this will mean a fresh pairing. 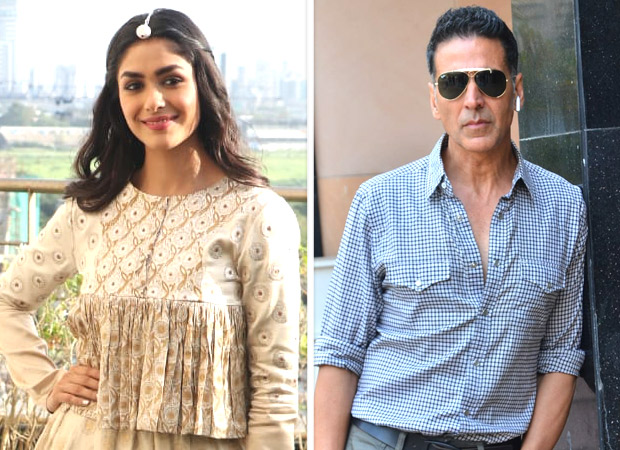 Says a trade source, “Nikkhil was keen to sign Mrunal as he’s worked with her in Batla House (where she plays John’s wife and a news anchor) and feels that she is very talented. Bell Bottom is said to be a spy thriller revolving around a cop-cum-detective’s stories. He is a cop in the day but likes to be a sleuth when off duty. If everything goes well and Mrunal signs Bell Bottom, she will play Akshay’s romantic interest. Her role is interesting and has shades to it – someone whom Akshay’s character meets in the course of his life as a cop and falls in love with her. It’s a retro movie set in the 1980s, and the thriller revolving around one of India’s forgotten heroes. It will be a mix of all Akshay, Vashu and Nikkhil’s style of filmmaking – action, emotion and entertainment and is said to be inspired from a real-life incident.”

Bollywood Hungama was the first to write about Akshay Kumar being in talks with producer Vashu Bhagnani, to discuss a project with him. The producer, who has given many blockbusters over more than two decades in the Bollywood film industry, is working with Akshay for the first time and buzz is that he has given Akshay a huge remuneration of over Rs. 120 crore to act in the movie.  Bell Bottom is produced by Nikkhil Advani, Vashu Bhagnani, Jackky Bhagnani, and Akshay Kumar. Akshay is said to have been paid a whopping amount for the role.

Akshay and Vashu have been in talks for quite some time to do a movie together while Nikkhil was looking for a good script for Akshay, post Airlift. Nikkhil, Akshay and Vashu coming together in one movie means the merging of three super brands - Nikkhil is also on a career high with his movies like Satyameva Jayate and Batla House doing excellent business at the box-office and his next Marjaavaan (starring Sidharth Malhotra and Tara Sutaria and directed by Milap Zaveri) is carrying very good reports. Nikkhil is also doing a movie with Arjun Kapoor and Rakul Preet Singh. He is also helming a web series called Bombay Diaries.

Akshay and Nikkhil come together after three years. Their last movie was Airlift (2016), directed by Raja Krishna Menon. The star is on a roll with his last releases including Kesari, Mission Mangal, Housefull 4 and Good Newwz being super hits. A large portion of Bell Bottom will be shot in London and is planned as a big budget extravaganza shot in other international locales too.

Also Read: Toofan: Here’s how Mrunal Thakur has been making Farhan Akhtar’s life difficult outside of the ring!