We all know that Dus Ka Dum is nearing its finale for its second season. Many actors visited the show to promote their films and owing to their camaraderie with the superstar. Now, not surprisingly, the finale too will be a star studded affair as we will see Yamla Pagla Deewana stars Dharmendra and Bobby Deol along with Raveena Tandon and Badshah in the last two episodes of the show. 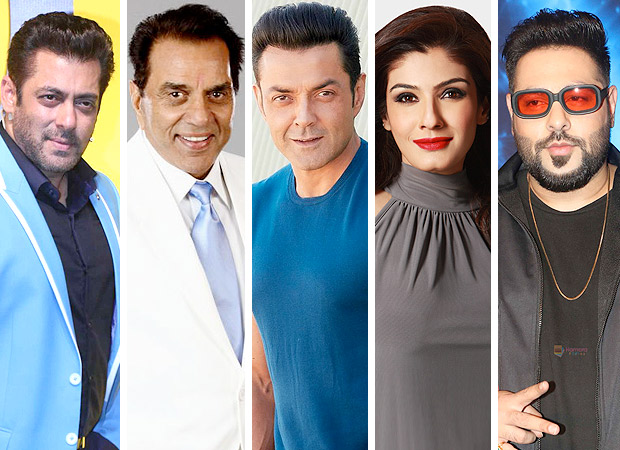 Well it is true that we have rarely seen Salman Khan and Raveena Tandon sharing screen space since Stumped. The duo had co-starred in films like Patthar Ke Phool, Andaz Apna Apna and Kahin Pyaar Na Ho Jaaye. It would be interesting to see the duo share their fun rapport on national television during the show.

On the other hand, Dharmendra and Bobby Deol are probably coming to the show to promote their forthcoming film Yamla Pagla Deewana Phir Se. However, it seems that Sunny Deol will be missing out on all the fun. Besides them, also coming on the show is rapper Badshah. The said finale episode will be spread out between both days of the finale weekend.

Dus Ka Dum, which went on air only a few months ago, will be going off air in the next couple of weeks. When it started, it initially grabbed some amount of attention but soon the TRPs of the game reality show started dropping down. Even an entertaining host like Salman Khan tried many experiments and one of them was to make it star-studded. After the same, many celebrity guests including Shah Rukh Khan and Rani Mukerji have shot for the show.

On the other hand, after the show, Salman Khan will continue hosting another reality show. The much controversial Bigg Boss is on the cards and the 12th season is expected to go on air very soon.