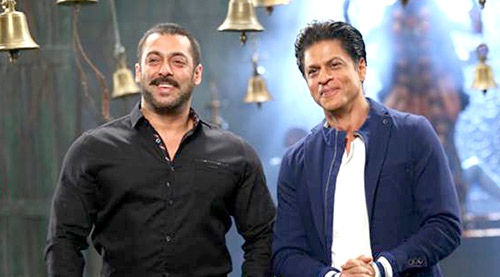 A while back we had reported that advocate Gaurav Gulati had filed a complaint against Salman Khan and Shah Rukh Khan for hurting religious sentiments when the duo had appeared on the sets of show Bigg Boss season 9 and were seen entering a place that appeared to be a temple with their shoes on. However, now we hear that a Delhi court has reserved its order on the criminal complaint filed against the two.

Additional Chief Metropolitan Magistrate Vandana Jain reserved the verdict after hearing arguments of the complainant who questioned the action taken report (ATR) filed by Delhi Police in which the megastars were given a clean chit. As per the police ATR, Salman Khan and Shah Rukh Khan were shooting at a make shift temple, which was part of the sets in a studio for the reality show, and had no intention to hurt religious sentiments.

For the uninitiated, advocate Gaurav Gulati had sought to file an FIR against Salman Khan and Shah Rukh Khan along with Colors channel and director and producer of Bigg Boss 9 for alleged offences under sections 295A (deliberate and malicious acts intended to outrage religious feelings), 298 (uttering words with deliberate intent to wound religious feelings) and 34 (common intention) of IPC. In the complaint, Gulati alleged that in a video for the show Shah Rukh and Salman were seen wearing shoes on the sets of the temple while shooting for an episode of Bigg Boss 9 where the idol can be seen in the background.