After having a record-breaking week, another interesting update has come from super popular group BTS. The septet is currently gearing up for the release of their fourth Japanese album 'Map Of The Soul: 7 - The Journey'. The title track 'Stay Gold' has already been released along with the music video. Now, the second original track 'Your Eyes Tell' will be previewed on July 13 ahead of the album release. In relation to the song, it will be used as an OST for a Japanese Movie Kimi No Me Ga Toikakete Iru which is a remake of the Korean movie, Always. 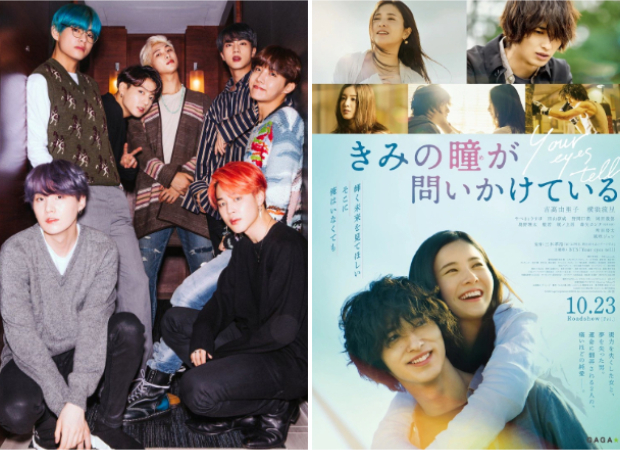 The film chronicles the story of Kaori who meets with a tragic accident that leads to blindness, but she clings on to her life and moves forward to find small pleasures that she can live with. She also has no family left. In her journey, she meets a former kickboxer Rui and the two begin to learn more about each other. As the story unfolds, the two of them begin to fall in love. This starts their new journey. The film stars Yoshitaka Yuriko and Yokohama Ryusei in the lead roles.

'Your Eyes Tell' has a lot of depth to it that brings a lot of colouring to the heartbreaking love story. It has been co-written and co-composed by the youngest member of BTS Jungkook. He was touched by the film and beautifully expressed his emotions through the song. The preview of the film gives a glimpse of the song. While the album releases on July 15, the film hits the theatres on October 23, this year.

In a statement released on Billboard Japan, BTS said, "'Your Eyes Tell', recorded in our 4th album in Japan, is the theme song of the movie Kimi No Me Ga Toikakete Iru. We are very happy to be able to participate in such a wonderful movie. This is a ballad song that member Jungkook participated in the composition, expressing the beautiful and deep world of love in the movie. The point that I would like everyone to listen to is the lyrics that contain the message, "Beautiful melody" and "I believe there is light in the future that your eyes are seeing, even in a variety of difficult situations." If you listen to our song 'Your Eyes Tell' and watch the movie that will be released song, everyone will be able to feel the feeling we have in the song. Please anticipate by all means!"

Another song that will be used as OST is 'Stay Gold'. It will also serve as Original Sound Track for Japanese drama, Spiral Labyrinth – DNA Forensic Investigation (literal translation). Tanaka Kei will headline the drama which is based on a manga of the same name.