Superstar Shah Rukh Khan's son Aryan Khan was arrested by Narcotics Control Bureau (NCB) office on October 3 after a cruise ship was busted for drugs. On October 2, NCB conducted a raid at an ongoing rave party on Cordelia Cruises' Empress ship in Mumbai following which 8 people were detained including Aryan. On Monday, he along with Arbaz Merchant and Munmun Dhamecha were sent to judicial custody till October 7. Today, at the bail hearing, the court said that police custody is not required but remanded all 8 accused to Judicial custody for 14 days. Aryan Khan has applied for interim bail that will be heard tomorrow. While the court has ordered judicial custody, the accused will be spending tonight in NCB's custody. 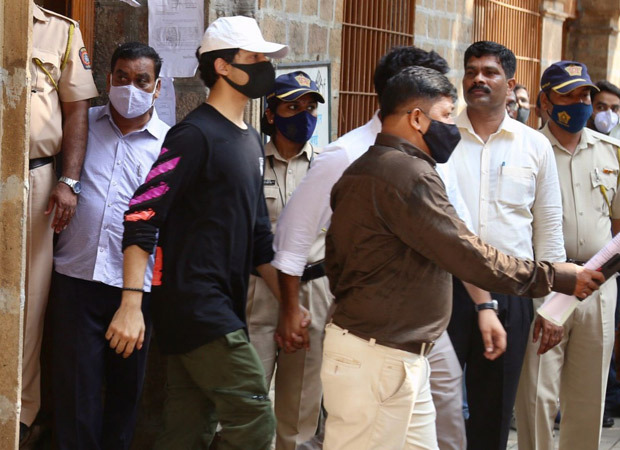 The NCB also made a new arrest Aachit Kumar who was allegedly named by both Aryan Khan and Arbaaz Merchant during the investigation, the NCB said in the court. The NCB also said that they will be conducting another raid soon and any possible arrest will have to be confronted with the present arrested. Public prosecutor Advith Sethan representing NCB said that Achit Kumar is a supplier of drugs and his arrest has led to the revelation of new facts and nuances. The prosecutor asked the court for custody of all the accused till October 11. The Court remanded Aachit Kumar to NCB custody till October 9.

ASG Anil Singh representing the NCB during the bail hearing of Aryan Khan, Arbaz Merchant Munmun Dhamecha, Nupur Satija, Ishmeet Singh, Mohawk Jaswal, Vikrant Chhoker, and Gomit Chopra asked the court for custody till October 11. Singh said that Aachit Kumar was brought in based on Aryan Khan's statement and a small quantity was seized from him. He requested the court to grant custody saying that the 8 accused need to be confronted with supplier Aachit Kumar.

Aryan Khan in his bail application said that he was invited on the cruise by his Pratik Gaba and told that he will get a VIP suit. “It is not their case that all passengers were involved in the rave party. I have chats with Pratik, there is no mention of a rave party in these chats. Pratik also knew Arbaz so he independently invited him. We had not gone together..Since I know him(Arbaaz) we just entered together,” he said in his plea.

“They searched everything, the bag they searched twice. Didn't find anything. They took my mobile. I am not talking about which pancha or who took me. I am not denying my friendship with Arbaaz but I have no association with all other things,” the bail plea stated.

"They can confront me with Aachit anytime. I can't retrieve the chat. The chats are with them. SC has said every day's custody should be disclosed to the court," Khan further said in his bail plea.

The advocates representing the rest of the accused also said that extremely small quantities were discovered from them and are a bailable offense.

In his closing argument seeking custody, the ASG stated, "We are an agency. Justice will be done to everybody. I don't care what background he has, everyone has to be investigated."

While passing the judgment, the court said, “Learned counsel for A1- Aryan Khan says that except being interrogated once, he has not been interrogated...mobile seized..the remand report clearly shows that the presence of. The accused with NCB is not necessary. ..not development since his arrest”.

Talking about the other accused, the judge stated, “The same has been reiterated by the other accused. They added that the remand is vague, cleverly drafted alleging conspiracy. They say that the remand report is silent on.” The court said that police custody is not justified and remanded the accused to judicial custody. The NCB argued that JC would require a COVID report and hence asked for NCB custody till tomorrow morning which was granted by the court.

NCB had seized 13 grams of cocaine, 5 grams of MD (mephedrone), 21 grams of charas (small quantity), 22 pills of MDMA (ecstasy) (intermediate quantity), and Rs 1,33,000 at International Cruise Terminal, Mumbai. However, they had said in the court on Monday that no drugs were found on Aryan Khan but they discovered small quantity contrabands on the co-accused.

ALSO READ: “These moments are the makers of your tomorrow”- Hrithik Roshan pens a heartfelt note for Aryan Khan amid drug case