Not too long ago, reports had it that Arjun Kapoor will be reuniting with his Sardar Ka Grandson co-star Rakul Preet Singh and The Lady Killer co-star Bhumi Pednekar for yet another project. While the actors remained silent about it, Arjun recently took to social media to confirm about his next with the ladies duo. Although rumours had it that the film was titled Meri Patni Ka Remake, the actor revealed that they are yet to finalize on the same. 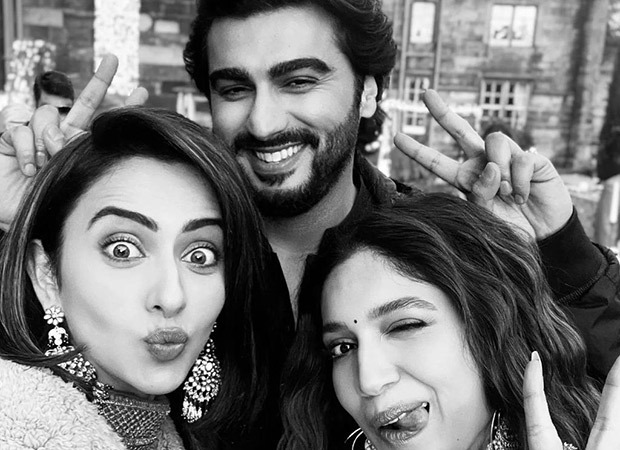 Arjun Kapoor, who is quite active on Instagram, was recently seen attending the Filmfare Middle East Achievers Award in Dubai and even shared a fun video with co-stars Ayushmann Khurrana and bestie Ranveer Singh. And it was in his recent post that the actor revealed that he has been shooting with Bhumi Pednekar and Rakul Preet Singh for his next. In the said post, he also mentioned that they have completed more than half of the shoot schedule of the film as well as revealed to his fans and followers that an announcement about the title will be made soon. Going the poetic way, he captioned this photo of him with his leading ladies saying, “Picture aadhi se zyaada done hai, Director Saab too much fun hai, Humari jodiyan tan tana tan tan hai, Title jald hi batane waale humare producer no 1 hai #TitleKyaHaiYaar ?? @rakulpreet @bhumipednekar #MudassarAziz @jackkybhagnani @deepshikhadeshmukh @vashubhagnani @pooja_ent.”

As mentioned in the post, this untitled venture will be produced Jackky Bhagnani and the rest of the team of Pooja Entertainment. Coming to his other projects, Arjun Kapoor, who was last seen on the big screen in Ek Villain Returns, is gearing up for the release of Kuttey. The film featuring stalwarts like Naseeruddin Shah, Tabu and Konkana Sen Sharma is an unconventional film that marks the directorial debut of Vishal Bhardwaj’s son Aasmaan Bhardwaj. The film, which was expected to release this month, has been pushed to January 13, 2023.

Also Read: Arjun Kapoor to begin shooting for the next schedule of his next film in Rishikesh and Delhi