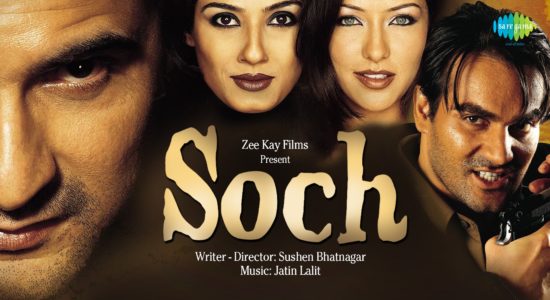 Raj Mathew (Sanjay Kapoor) has a problem in his life. By profession a film star, he loves his wife, but she is acutely suspicious of him. His marriage is on the rocks.

Mahulika (Aditi Govitrikar), Raj's wife, has a problem as well. She loves Raj but cannot control the insecurity of losing him to another woman. Her love is self-destructive.

Preity Saradesai (Raveena Tandon), a choreographer turned director, has a problem of being labelled the other woman. Though she is in love with Raj, she keeps her distance from him.

When Om (Arbaaz Khan) enters their lives, he comes not only with his problem, but also with a solution ? murder ? and a murder is committed.

The basic premise of the film is genuinely 'hatke', but stories like these find flavour and acceptance in the international market. In the Bollywood scenario, a story like this would be considered more of an experiment.

SOCH is a patchy product as far as the script goes. The film is absorbing at places, but at times several questions are left unanswered by the writer-director of the film.

*One, Raveena is supposed to be a film director, but she comes across as an actress, breaking into a song with the hero of her film.
*Two, the reasons that prompt Aditi to suspect her husband (to such an extent that she gets self-destructive!) could've been more convincing.
*Three, the Tiku Talsania track has no relevance with the story. Also, it comes as a major hindrance in the screenplay.
*Four, the Danny track in the climax looks totally unjustified. A better ending was required.

There's no denying that writer-director Sushen Bhatnagar has shot the film well. Technically speaking, his shot execution is stylish, but his choice of the subject and the screenplay lets him down completely.

The film clearly belongs to Arbaaz Khan. Essaying a negative role after DARAAR, Arbaaz evokes terror whenever he comes on screen. Sanjay Kapoor is alright. Raveena Tandon leaves a mark in several sequences. Aditi Govitrikar does quite well. Danny Denzongpa doesn't get much of a scope.

On the whole, SOCH is a weak film. The tough opposition this week and the flow of new films in the coming weeks will tell on its business.