Ask anyone who has a sibling and they’ll admit that they have had physical fights with them while growing up. This aspect however has been rarely explored in our Hindi films, although a few films have talked about the relationship between brothers or sisters. While most grow out of our action avatars when it comes to our siblings, some don’t. Shakun Batra’s KAPOOR & SONS [2016] explored this aspect as it showed Sidharth Malhotra and Fawad Khan indulging in physical assaults as grown up adults. Vishal Bhardwaj now turns the tables with his latest outing PATAAKHA and throws light on the lives of two sisters who have no qualms fighting with each other. So does PATAAKHA succeed in entertaining viewers? Or does it fail in its endeavour? Let’s analyse. 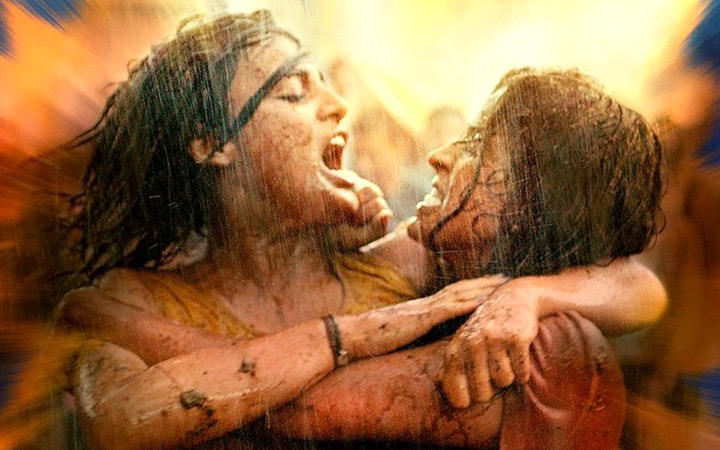 PATAAKHA is the bittersweet story of two badass sisters. Badki (Radhika Madan) and her sister Chhutki (Sanya Malhotra) reside in a village in Rajasthan. Their mother is no more while their doting father Bapu (Vijay Raaz) works as a mine contractor nearby. Badki and Chhutki are forever fighting and beating each other for the smallest of reasons. Bapu as a result is perennially tensed. The sisters then fall in love – Badki with Jagan (Namit Das) while Chhutki falls for Vishnu (Abhishek Duhan). On the other hand, Bapu risks losing his mine if he doesn’t give bribe to tune of Rs. 4 lakhs to the new forest officer. Patel (Sanand Verma), the Mr Moneybags of the village and also the one with a roving eye, agrees to pay the said amount to Bapu in exchange for marriage with either Badki or Chhutki. A simple toss decides who’ll marry Patel. Badki unfortunately is selected as Patel’s wife-to-be. Chhutki is overjoyed that she’ll finally be free of Badki’s torture. However, on the eve of the wedding, Badki elopes with Jagan. On the day of the marriage, Patel decides to marry Chhutki instead. When Patel arrives for the wedding at night, he’s shocked to see that Chhutki has run away as well, with Vishnu! Both the sisters get married to their respective lovers. However, their joy is shortlived when they realize that Vishnu and Jagan are brothers and even after marriage, they’ll have to share the household with each other. What happens next forms the rest of the film.

Charan Singh Pathik’s story (originally published as a tale called ‘Do Behenein’) is interesting and novel. Vishal Bhardwaj’s screenplay has some plusses. He has kept the tone of the film light and fleshed out some scenes very well. An interesting sequence in the first half that stands out is Badki enquiring at the milk plant while Chhutki making inquiries at a coaching institute. Notice how the camera pans out to a poster of Narendra Modi hugging Donald Trump! It’ll surely induce chuckles. Also, the way he draws a parallel to India and Pakistan’s equation while describing Badki and Chhutki’s relationship is interesting. However, in the second half, he loses grip over several scenes. Vishal Bhardwaj’s dialogues are witty at places. At few places however, some dialogues are difficult to decipher.

Vishal Bhardwaj’s direction is controlled but in a few scenes, he could have done a better job. The entire portion of Badki and Chhutki facing physical ailments look very unrealistic and takes away the charm created by the earlier scenes. Moreover, a few scenes are disgusting and were avoidable. For instance, there was no need of showing excreta, people spitting on stones repeatedly etc. As it is, the visuals of women fighting are going to keep a section of audiences away and such scenes would further add to the alienation.

PATAAKHA is a black comedy and definitely has its moments. The duration thankfully is controlled, at 136 minutes. The beginning portions are breezy and entertaining. Thankfully, the scenes of physical fights between the sisters are not incorporated every now and then. The way Badki and Chhutki fall in love seems a bit quick but works. But the equation is very well established among the principal characters. The scenes where the sisters run away make for a nice watch and same goes for when they realize that their husbands are related. Post-interval, the interest dips a bit in the initial portions. The interest rises again when Badki and Chhutki hatch a plan for independence from each other. Once that happens, the film shockingly goes downhill. The withdrawal symptoms faced by them are too unconvincing and difficult to digest. The finale thankfully has some fun moments which bring the film back on track.

Sanya Malhotra, last seen in DANGAL [2016], can once again be seen getting into the mud while trying to defeat her opponent. This is no easy role and it required confidence and losing inhibitions. On both fronts, Sanya scores very well and the same goes for Radhika Madan. Not many actresses would like to do such a role in the initial years of their careers. But Radhika not only took up the challenge but also came out with flying colours. Sunil Grover (Dipper) has the most rocking character in the film and he’s surely the trump card of PATAAKHA. His scenes would be loved by the audiences as he tries to complicate matters into the lives of the warring sisters and her father. Performance-wise, he’s first-rate! Vijay Raaz delivers a terrific performance yet again. He contributes to the laughter but your heart also goes to him as he tries to survive amidst his ferocious daughters! Namit Das and Abhishek Duhan lend able support. Saanand Verma is decent. Chomina Beyong (Patel’s wife) is hilarious. Usha Nagar (Dadi), Sameer Khakhar (Sarpanch) and Ajay Kumar (Eye surgeon) are fine. Others do a good job.

Vishal Bhardwaj’s music is hardly memorable but is well incorporated in the film. ‘Naina Banjare’ stands out. ‘Balma’ also works thanks to its picturisation. The title song is forgettable while ‘Gali Gali’ comes at a crucial juncture. The much talked about item song ‘Hello Hello’ featuring Malaika Arora is shockingly missing from the film and is not even a part of the end credits, although the credits mention her presence in the film in the ‘mela’ sequence! Vishal Bhardwaj’s background score has a fun tone and it helps in keeping the mood light.

Ranjan Palit's cinematography is raw and grungy, in keeping with the film’s theme. Subrata Chakraborty and Amit Ray's production design is realistic. Karishma Sharma’s costumes are straight out of life. Soma Goswami and Natasha Mathias’s makeup design deserve special mention for the heroines look quite convincing as rebellious village belles. A Sreekar Prasad’s editing is okay.

On the whole, PATAAKHA is a decent entertainer which has its moments but the post-interval portions are quite unconvincing. At the box office, it will need to rely on word of mouth to register decent collections.

This movie is so much fun and different. All actors have done great job and the New comers Radhika…

Drama begins right from the start of the movie, amazing performance by all the actors specially…