It has been a while since Bhatts came up with a musical love story. There was a time when every film of theirs used to have chartbuster music regardless of genre, be it romance, horror or crime. However, now that they back after a hiatus, they have roped in multiple composers [Samuel & Akanksha, Javed-Mohsin, Tanishk Bagchi, Jeet Gannguli, Abhishek Mishra] and lyricists [Rashmi Virag, Prashant Ingole, Manoj Kumar Nath, Kunaal Vermaa and Mehmood Arfat] to do the job. Since the film features a newcomer male lead [Varun Mitra] along with relatively new entrant leading lady [Rhea Chakraborty], one waits to see what does the team have to offer. 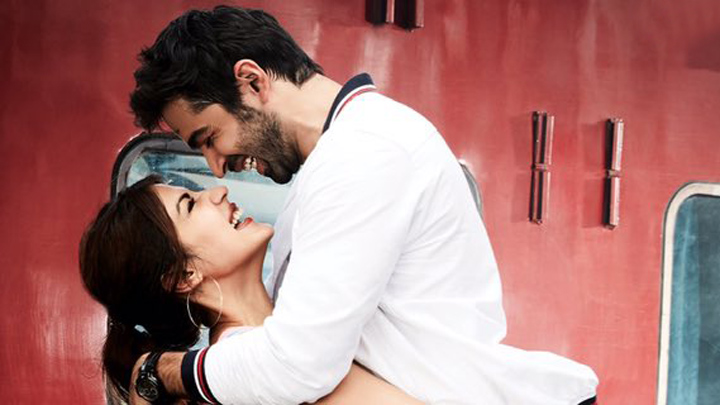 Jubin Nautiyal sings to the tune put together by Samuel & Akanksha which goes as 'Tum Se'. The song has just the kind of words and music that comes with the Bhatts territory. With a Western touch to it that is fused with contemporary Hindi film music, 'Tum Se' turns out to be a decent hear though one would have expected a more high-on-energy kick-start instead of this one which is way too slow and sober. The song later comes in a three more versions. While a couple of these are 'adlib versions' are rendered by Jubin Nautiyal and Shilpa Rao respectively, there is also one more solo version by Shilpa Rao which goes as 'Mujhme'. These versions do their job well in ensuring that the song does get etched in your memory.

It's the sound of piano that marks the beginning of 'Pal' which is easily the best song of Jalebi. As a matter of fact it is also one of the better love songs to have been churned out by Bollywood in 2018 and one wonders why the makers didn't place this one right at the beginning of the album. With the 'jodi' of Arijit Singh and Shreya Ghoshal coming together, this Javed-Mohsin composed number (which also appears again, this time as a Shreya Ghoshal solo version) has truly beautiful lyrics and makes you fall in love right from the 'mukhda' to the 'antara'. In fact the only complaint that you have with the song is that they it doesn't last long and hence you have to play it repeatedly in loop.

'Mera Pyaar Tera Pyaar' is the next song to arrive and yet again this one too belongs to the romantic genre. Composed by Jeet Ganguly, this one has Arijit Singh going solo and yet again he comes up with a heartfelt rendition. That said, even though there is nothing wrong with the tune and while lyrics too have a simple yet effective conveying of love, the overall impact is not the kind that would make you go 'wow' with the tune. In fact it comes across as a little too lazy and the poetry too is not the kind that gets on your lips instantly.

Tanishk Bagchi steps in as a composer for 'Tera Mera Rishta' and this one turns out to be one of the better songs of Jalebi. It manages to make a good impact too and is next only to 'Pal' in terms of the melody and simplicity that it brings along with it. Rendered by KK and Shreya Ghoshal who are ever-so-reliable as singers, 'Tera Mera Rishta' boasts of a good composition with well-meaning lyrics that do stay with you. The song later also arrives as a solo version by KK and you only gain by listening to this one on a repeat mode.

The song that brings the soundtrack to close is 'Pehle Ke Jaisa' and this one somehow doesn't quite take forward the beauty of Jalebi that one has witnessed so far. A sad song about separation and remembering the good times gone by, this Abhishek Mishra composition turns out to be too much of a drag and you don't quite get hooked to the emotions that it attempts to bring on. Rendition by KK too is not the kind that would bring on a heartfelt appeal and hence the song only turns out to be a quick skip.

The music of Jalebi is a mixed bag where a couple of songs work really well whereas a couple of songs just about manage to pass muster. Though not one of the best to come out from the house of Vishesh Films, it still has its moments.