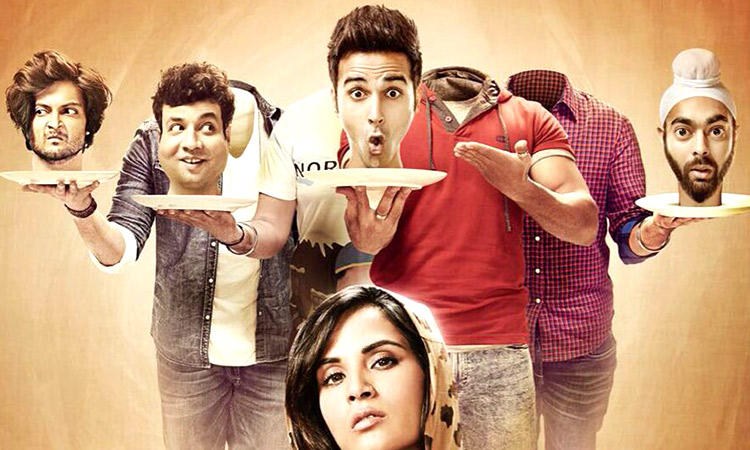 FUKREY in 2013 came sans much noise but emerged as a sleeper hit thanks to its quirky writing, the lovable Delhi vibe and engaging execution. Hence, it was no surprise that FUKREY RETURNS was announced and it’s interesting that the same star cast has been retained. So does FUKREY RETURNS manage to be as good as or better than its predecessor? Or does it pale in comparison and fails in its endeavour? Let’s analyse.

FUKREY RETURNS tells the story of the Fukras and the madness that ensues after their arch nemesis comes out from jail. One year after getting Bholi Punjaban (Richa Chadha) arrested, the gang of boys – Hunny (Pulkit Samrat), Choocha (Varun Sharma), Zafar (Ali Fazal) and Lali (Manjot Singh) are enjoying their time. But all hell breaks loose as Bholi is released from prison. She wants to avenge the humiliation that she had to face thanks to the Fukras and hence she compels them to be a part of an illegal initiative that involves conning the entire city of Delhi. How it leads to major problems and how the boys come out it forms the rest of the film.

FUKREY RETURNS begins on a great note as the opening credits are well done and sets the mood for the film. The dream sequence that follows is hilarious. The film moves swiftly as there was no need for character introduction since viewers are already acquainted with them. One expects fireworks (pun intended) after Bholi attacks the boys with crackers. But the plan of conning Delhiites is not properly explained and moreover, it moves too quickly. The plan is too silly and anyone could guess that it’s bound to fail. As a result, the convincing factor is not there despite the fact that logic is not to be taken seriously in this series. Moreover, all characters in FUKREY had some role to play in the film. In FUKREY RETURNS however, many characters don’t have much to do. Varun Sharma steals the limelight and Ali Fazal shockingly has very little to do. As for Priya Anand and Vishakha Singh, the lesser said, the better. Thankfully, the film has lot of positives. The one liners are hilarious. At several places, scenes are very well executed. The film picks up well in the second half and the climax is quite intriguing.

Vipul Vig’s story is wafer-thin and takes the same formula used in FUKREY. Vipul Vig’s screenplay however is nice and the quirkiness is added well in the script. It could have been however a bit simpler in the first half in the lottery scam sequence. Vipul Vig’s dialogues are one of the highpoints and are sure to get lot of applause and whistles. Mrighdeep Singh Lamba’s direction is in the same space as part 1 and works for most of the film. Even FUKREY had logic kept on backseat but the director had balanced it well by ensuring that it didn’t get too unconvincing for its genre. But in FUKREY RETURNS, few scenes get too illogical. For instance, the way the boys used to hang out in Delhi zoo despite being closed and even play with tiger’s cub is silly but thankfully later on, this aspect has a connection in the film. Also, this is a clean film that can be enjoyed by the entire family. That definitely gives FUKREY RETURNS a bigger appeal.

Talking of performances, Varun Sharma takes the cake. He has a bigger and more important role and he rocks the show! Few scenes didn’t have relevance to the principle plot but still one won’t have complaints as Varun brings the house down. For instance, the sequence where Varun meets his date in the zoo and then the scene where he says how his father acquired him. Pulkit Samrat is decent and performs ably. Despite Varun, he manages to maintain a strong position. Ali Fazal gets sidelined although he gives a genuine performance. Manjot Singh is lovely and does raise laughs at places. Richa Chadha yet again gives a powerhouse performance. She is enjoying playing the badass Bholi and it shows. And there’s a surprise in store for audiences in the climax with regards to Bholi that will surely be loved! Pankaj Tripathi (Pandit) has a crucial role and contributes to the laughter. Since the release of FUKREY, Pankaj has become quite popular and in regard, he doesn’t disappoint as his screen time is quite a lot. Rajiv Gupta (Babulal Bhatia) is too good in the villainous role. Priya Anand (Priya) is cute and sadly doesn’t get much scope. Vishakha Singh (Neetu) is okay in the cameo. The actors playing the Chief Minister and Priya's father are decent.

The songs don’t serve much purpose. ‘Mehbooba’ is foot tapping while ‘Tu Mera Bhai Nahi Hai’ is relegated to the background. ‘Ishq De Fanniyar’ is missing from the film and ‘Peh Gaya Khalara’ is played in the end credits. Sameer Uddin’s background score is impressive.

Andre Menezes’s cinematography is neat. Manohar Verma’s action is real and not over the top. Mayur Sharma’s production design is top notch. Dev Rao Jadhav’s editing is simple. The VFX is brilliant, especially in the tiger scene.

On the whole, FUKREY RETURNS is a fun, clean film that works despite the illogical and slightly unconvincing plot. With no other significant Hindi movie in theatres around, FUKREY RETURNS definitely has a chance of excelling at the box office.

A great comedy movie after a long time must say, there isn't any point where one could stop…