Chef Movie Review: Chef is a feel good cerebral entertainer that charms you with its simplicity. 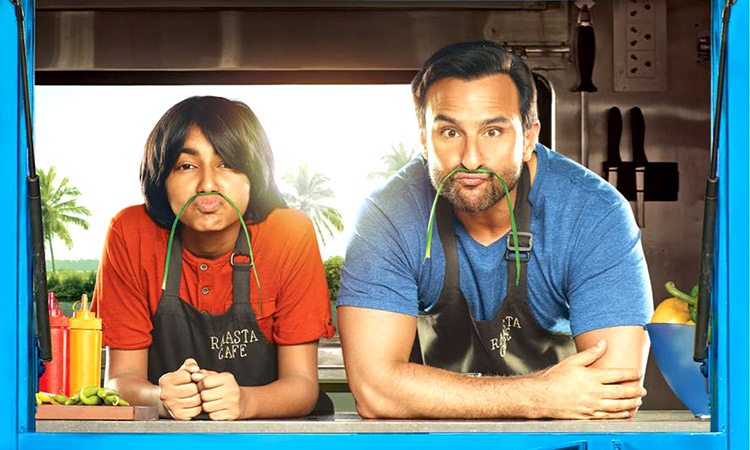 There’s a foodie hidden in all of us. Hence, films based on food can work big time with the audiences. In the past, SALAAM NAMASTE, CHEENI KUM and LUV SHUV TEY CHICKEN KHURANA too dealt with food as the subject and impressed the viewers. CHEF, as the title suggests is a ‘food film’ of sorts and what’s more, it also speaks about the challenges faced by parents and children that is a burning and a very relatable topic. So does CHEF impress or does it fail to entertain the audiences, let’s analyse.

CHEF is the story of a father who connects with his son during a fun gastronomical trip across India. Roshan Kalra (Saif Ali Khan) is a chef in New York. He is divorced and his son Armaan (Svar Kamble) stays with his mother Radha Menon (Padmapriya Janakiraman) in Cochin. Due to his work commitments, Roshan finds it difficult to come down to Cochin and spend time with Armaan. Roshan also has a high temper and one day he punches a customer who complains about his cooking. Roshan is fired from his job and he uses this opportunity to come to Cochin. He does the much needed bonding with his son. When the times comes to go back to New York, Roshan is offered an opportunity to run a food truck or rather a ‘food bus’ by Radha’s close friend Biju (Milind Soman). Roshan decides to take the truck from Cochin to Delhi and give the people of his hometown a gastronomical treat. Armaan also joins him along with his protégé Nuzroon (Chandan Roy Sanyal). What happens next forms the rest of the film.

CHEF is based on the much-loved Hollywood film by the same name, made by Jon Favreau. But as the trailers have already made it clear, the Hindi version is not a scene-by-scene remake and several changes have been done, probably to suit the Indian audiences. The story penned by Ritesh Shah, Suresh Nair and Raja Krishna Menon is simple and decent. Ritesh Shah, Suresh Nair and Raja Krishna Menon’s screenplay is effective with nice dollops of humour.

CHEF starts on a slow note. Roshan’s two minute long childhood portion is lovely but the New York sequence is very dry. The portions involving Roshan’s outburst in front of the customer and later in the kitchen seem unconvincing. Also, Roshan’s conversation with Vinnie (Sobhita Dhulipala) in his apartment doesn’t really engage. Thankfully, the film picks up when Roshan arrives in India and meets his son and ex-wife. Roshan teasing Armaan over his crush and Roshan-Armaan’s trip to Delhi and Amritsar are well-executed. The Father-son relationship is the highpoint of the movie. Also, Roshan’s jealousy for Biju is funny. The second half is when the road trip begins also puts a smile on your face. CHEF being in the ‘food porn’ zone, several scenes are sure to water your mouth though one expected to see more food visuals in this film.  There are several scenes which happen very conveniently – the manner in which people throng to Roshan’s food bus and the way it becomes famous seem illogical.

Ritesh Shah’s dialogues however are witty and straight out of life. Raja Krishna Menon’s direction is fine and doesn’t do much to elevate the impact. It works in a way as the film remains a simple fare from start to finish but at the same time, one wishes at some places if the film could have made a stronger emotional impact. This is especially true in the climax scene involving Roshan running through the peak-hour traffic.

Saif Ali Khan delivers a marvellous performance and impresses thoroughly with his trademark humour. Even in the emotional and confrontational sequences, he shines. Interestingly, he takes a dig at himself in the film and it’s really funny and unexpected. Svar Kamble is highly impressive and has some crucial scenes. He performs ably and his bonding with Saif looks quite real. Padmapriya Janakiraman looks stunning and delivers a very real and restrained performance. She ensures that she makes an impact in this father-son saga. Chandan Roy Sanyal delivers a very adorable performance but gets limited scope to showcase his acting talent. Milind Soman as always looks great and delivers a competent performance. Dinesh P Nair (Alex, the driver) is hilarious and his looks and character leave a huge mark. Sobhita Dhulipala is wasted. Ram Gopal Bajaj is quite nice in a small role. Raghu Dixit has a nice cameo in the film as well.

Raghu Dixit’s music goes well with the mood of the film. ‘Shugal Laga Le’ is like the anthem of the film. ‘Banjara’ has the exhilarating feel. ‘Tere Mere’ doesn’t make an impact while ‘Darmiyaan’ is very well presented. Raghu Dixit’s background score is foot tapping. Priya Seth’s cinematography is lovely and delectable, especially the food scenes. But even the locales of Kerala and Amritsar are captured beautifully. Also Shiv Kumar Panicker’s editing is satisfactory. Anuradha Shetty’s production design is very nice especially her work on the food bus.

On the whole, CHEF is a feel good cerebral entertainer that charms you with its simplicity. At the box office, it should appeal to the target group of multiplex audience that appreciates discerning cinema. The film has the potential to grow with a good word of mouth.

" I don’t think it was even publicized correctly," Saif Ali Khan speaks up on Chef failure at the box office

Box Office: Chef has a very poor Week One, to fold up under Rs. 8 crore

What went wrong with Chef? Trade experts give their views

Box office: Chef turns out to be the biggest disaster of 2017

must watch...go for it.. u will find difference from other bollywoods flicks.. 2 songs are very…

it would good see the difference kind of movie in cinema like this. Self did good job and love…

Saif is brilliant in Chef, Must watch for everyone. After debacle of Rangoon , Saif Ali Khan is…