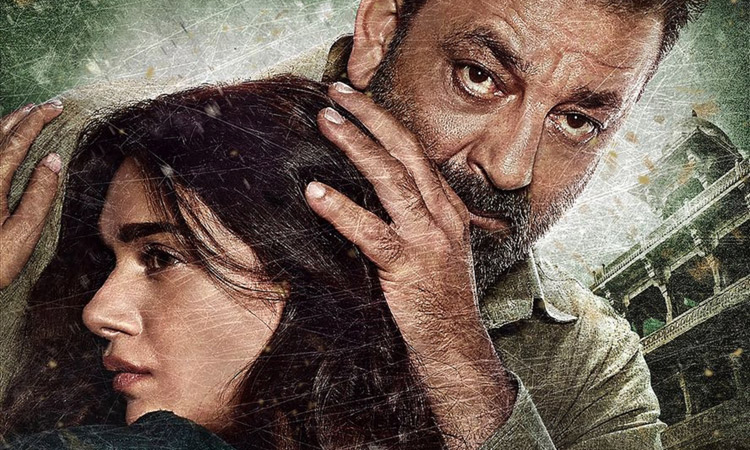 Post the shocking Nirbhaya gang rape in 2012, a major section of the society has begun to see the problems faced by women more seriously and in a new light. It has also led to Bollywood making multiple films on this subject. PINK, MAATR and MOM dealt with this growing menace in recent times and now Sanjay Dutt choses this hard-hitting topic for his comeback film, BHOOMI. So does this film turn out to be an entertaining one or does it fail, let’s analyse.

Arun (Sanjay Dutt) is a widower based in Agra who has single-handedly raised his daughter Bhoomi (Aditi Rao Hydari). An eligible boy Neeraj (Sidhant Gupta) gets interested in Bhoomi and she too falls for him. Arun is happy with this union. However, Vishal (Puru Chibber) from her neighbourhood loves her too. He asks her out few days before the wedding. An enraged Bhoomi slaps him. Vishal narrates about his ordeal to his cousin, the evil Dhauli (Sharad Kelkar). He instigates him to kidnap Bhoomi and then rape her. Vishal goes ahead and does it. But not just him, as even Dhauli and his henchmen Ghulam (Veer Aryan) rape Bhoomi. Arun’s world comes crashing down when he learns about it. How he hits back and avenges Bhoomi's rape is what the rest of the film is all about.

The story written by Sandeep Singh has been done to death multiple times in Bollywood and has no novelty. Raaj Shaandiliyaa's screenplay comes across as clichéd and dated. BHOOMI suffers from two major problems. Firstly, it comes too late in the day. Audiences have already seen KAABIL, MAATR and MOM which were also similar films dealing with rape and revenge. Hence the impact of BHOOMI gets diluted. Secondly, the film takes too long to really get into the revenge drama zone. The narrative is so slow, dragged and boring that nothing happens until the last 20 minutes when Arun finally starts taking revenge.

However Raaj Shaandiliyaa's dialogues create the necessary impact, though only at few places. Interestingly, the film has dialogues about women empowerment, progressive thoughts, women safety etc, but it shows violence against women through the major part of the runtime.

Omung Kumar's direction is very weak. He has used all the Bollywood clichés and made the film extremely violent. Everyone is corrupt and the society is full of hypocrites in this story. Three scenes however are very well executed – when Sanjay Dutt gets new shoes for Aditi, the courtroom scene where Dutt gives a hard hitting speech and when Sanjay Dutt informs about the punishment for rape in different countries of the world to one of the victims.

Coming to performances, Sanjay Dutt is brilliant and his emotions look genuine. He looks convincing as a helpless father and also powerful when he takes revenge in the final scenes. The way his eyes do all the talking in the police station scene is seen to be believed. Aditi Rao Hydari is good in her part and her portrayal of a rape survivor is very impactful. You genuinely feel for her in the film. Sharad Kelkar is the best out of all the villains. He looks very convincing. Riddhi Sen (Jeetu) delivers an effective performance and he has a crucial part in the film. Veer Aryan (Ghulam) gets little scope but does fine. Puru Chibber is quite nice as the rapist as well as the helpless target of Arun. Shekhar Suman (Taj) is wasted. Sidhant Gupta does well in his cameo.

Sachin-Jigar's music is weak and has no scope. ‘Will You Marry Me’, played during opening credits, is the only one that works. ‘Jai Mata Di’ played in the climax enhances impact. The Sunny Leone item song ‘Trippy Trippy’ looks forced and is badly placed. Ismail Darbar's background score is strong.

Arthur Zurawski's cinematography is very good. Vanita Omung Kumar's production design is authentic and rustic. Jayesh Shikharkhane’s editing is disappointing. The 135 minute long film should have been trimmed by 15-20 minutes to create the necessary impact. Javed-Aejaz's action is too gory and might put off the family audiences.

On the whole, BHOOMI comes across as a decent entertainer with power packed performance by Sanjay Dutt. At the box office, it will have to compete with other releases for its share of footfalls.

Sanjay Dutt makes a strong comeback. What a great performance. Aditi Rao Hyadri is outstanding. She…