Article 15 Movie Review: Ayushmann Khurrana & Anubhav Sinha's ARTICLE 15 is a hardhitting film that raises some important issues related to caste, that are plaguing the country.

One of the burning issues of the country is the caste system. Despite relevant laws and provisions, one can’t deny that the discrimination of various communities continue with alarming regularity. At times, it manifests into shocking crimes. The political class takes advantage of these conflicts and it further creates a divide. Very few films in Bollywood have plots that actually revolves around caste, shockingly. Anubhav Sinha however takes up the challenge, motivated by the success of his last year’s flick MULK, which dealt with religious tensions. The result is ARTICLE 15, featuring the urban audience’s favourite star Ayushmann Khurrana in the leading role. The trailer and content has already become a talking point. So does ARTICLE 15 succeed in giving audiences a thrilling time? Or does Anubhav Sinha miss the bus this time? Let’s analyse. 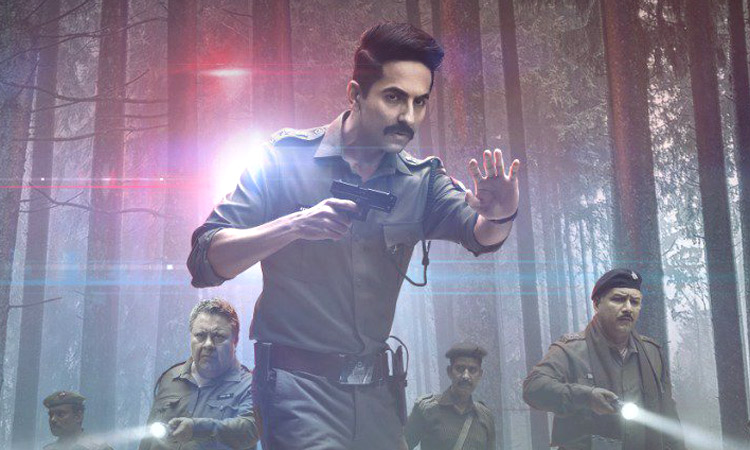 ARTICLE 15 is the story of a righteous cop trying to solve a caste-related crime. Ayan Ranjan (Ayushmann Khurrana) is an IPS officer from Delhi who has been transferred to a village named Lalgaon in Uttar Pradesh as punishment posting. As soon as he joins duty, he comes to know about a case involving three missing girls from the Dalit community in the village. The cops out there don’t investigate the matter, citing that the case isn’t serious and the community often files false complaints. The next day however, the corpse of two of the missing girls – Shalu and Mamta – is found hanging on a tree. The third girl, Pooja, is missing. One of the girls from the community, Gaura (Sayani Gupta) tells Ayan that these three girls used to work under the local contractor Anshu who used to pay them Rs. 25 per day. The girls then asked for a raise of just Rs. 3 but it was rejected by Anshu. Hence, they protested and left work. Gaura alleges that Anshu possibly violated the girls to teach them a lesson. Ayan decides to investigate the matter as he realizes that Gaura is indeed right. But officer Brahmdutt Singh (Manoj Pahwa), working under Ayan, secretly tries to change the narrative of the crime. He plants a story in a newspaper that both the girls were in a same-sex relationship and that’s why their fathers killed them. In short, it was not a caste-related crime but honour killing is what he tries to prove. He also forces Dr. Malti Ram (Ronjini Chakraborty) to change the post mortem report, although it’s clear that Shalu and Mamta had been repeatedly gang raped and then hung on the tree. Amidst all these challenges, Ayan attempts to solve the case and find Pooja. To top it all, a Dalit underground leader Nishant (Mohd. Zeeshan Ayyub) attacks police officer Jatav (Kumud Mishra) and Ayan’s PA Mayank (Ashish Verma) and sets their jeep on fire. What happens next forms the rest of the film.

Anubhav Sinha and Gaurav Solanki's story is very hard-hitting and deserves to be told. It is loosely inspired by events like the Badaun rape case and Una flogging incident. The various characters, their dilemmas, and of course their caste status is well put out and used. However, one also wishes the film didn’t have so many people as it becomes confusing. Also, not all contribute entirely to the main plot. Anubhav Sinha and Gaurav Solanki's screenplay is engaging and keeps one hooked from start to finish. There’s so much happening every minute and the writers try their best to keep audiences captivated. A few scenes however should have been written in a more entertaining way. Anubhav Sinha and Gaurav Solanki's dialogues are one of the pillars of the film. They take several scenes to another level. And the writers don’t take a safe route. The names of various castes are fearlessly mentioned and thankfully, the CBFC hasn’t chopped off these references either. It’s a pleasant surprise that even the F-word has been retained. In one sequence, the characters even discuss about the symbols of the political parties and it’s easy to understand what they are hinting at.

Anubhav Sinha's direction is first-rate for most parts. It’s a very sensitive topic, which is why most filmmakers have feared taking it up. Anubhav not only makes a film out of it, he does a fine job and also ensures the various communities don’t get offended. But one wishes he had made ARTICLE 15 in a more commercial way. His earlier film MULK was easy to comprehend and had a thrill element and that made it more mainstream. ARTICLE 15 is entertaining and massy only in parts. In a few scenes, it seems like a documentary. A few moments however are very memorable and keep lingering in one’s mind for a long time. The shots where sewer cleaners enter the gutters without any safety equipment is bound to haunt viewers. Another brief but powerful shot is how political workers put up the banner of the upcoming rally on the very wall where posters of missing Pooja are pasted. It’s quite an interesting way to subtly tell viewers about how society has got the priorities all wrong.

ARTICLE 15’s initial scene is quite a shocker but then the interest levels drop. The first 10-15 minutes are spent in introducing the characters and setting. It’s when the dead bodies are found that the film rises again. The complexities are laid out very well and one begins to see with interest how Ayan wades through these challenges and attempts to bring justice. One of the most memorable sequences of this hour and also the film is when Ayan gets outraged after knowing the caste status of fellow cops and how there are plenty of hierarchies. The intermission point takes the cake as the finest scene of the film and will surely be greeted with claps in cinema halls. It also excites audiences as they expect second half to be even better. In the second hour however, the film gets quite complicated. The subplots of Nishant and the Mahant ji are interesting and even realistic but don’t gel well with the main plot. On the positive side, the twist in the tale is unpredictable. The scenes of Nihal Singh and his sister give goosebumps. Also, the sequence of Ayan being interrogated by the CBI is arresting. The climax is quite impressive and the film ends on a fantastic note.

Ayushmann Khurrana is in top form. He’s mostly known for quirky roles but last year, he surprised everyone by exceling in the thriller ANDHADHUN. In ARTICLE 15 however, he goes one step ahead as there’s no scope for comedy at all here. Yet, he comes out with flying colours. Even with his silences and eye movements, he conveys so much. ARTICLE 15 has created a buzz also because he’s there in the film and he ensures he doesn’t disappoint his fans and admirers. Manoj Pahwa leaves a huge mark. Anubhav Sinha extracts the best from him – last year he rocked in MULK – and now with this flick, he yet again impresses. Watch out for the scenes when he charges towards Jatav and in the second half when he confronts Jatav. Kumud Mishra is the surprise of the film. His role is very well fleshed out and with his performance, he takes it on a high. He gets to be in a clapworthy sequence in the second half. He also contributes to the comic quotient in the movie. Sayani Gupta is efficient. She arguably did a similar role in JOLLY LLB 2 [2017] where also she was begging the powerful people for justice. But here, the setting is different and she tries her best to ensure her performance doesn’t remind one of any previous performance. Her breakdown scene is chilling. Isha Talwar (Aditi) is decent and her chemistry with Ayushmann is quite fresh. Aakash Dabhade (Satyendra Rai) has a crucial part and is well cast. Mohd. Zeeshan Ayyub gives a powerful performance and suits his character. It’s a well written part but one wishes his later portions had more impact to the overall plot. Ronjini Chakraborty is quite confident. Nassar (CBI official) is apt. The actors playing Anshu, Amla the maid, Nihal Singh and Mahant are fine.

Music has no scope in the film and it’s not relegated even in the background. 'Kahab Toh' is played in the opening credits and its lyrics are quite sharp. 'Shuru Karein Kya' is played during the end credits and though it is catchy, this rap track looks out of place considering the theme of the film. Mangesh Dhakde's background score is not consistent but the exhilarating music elevates impact. Ewan Mulligan's cinematography is quite raw and suits a film of this genre. Nikhil Kovale's production design is realistic. Overall, the look of the film is quite rich and even a bit haunting and it works. Vishakha Kullarwar's costumes are straight out of life, especially the ones worn by the marginalized communities. Yasha Ramchandani's editing is appropriate.

On the whole, ARTICLE 15 is a hard-hitting film that raises some important issues related to caste, that are plaguing the country. At the box office, the powerful plot and brand Ayushmann will ensure that it gets decent footfalls in the multiplexes.

2 Years Of Article 15: Ayushmann Khurrana - "We will need films, with its superlative content, to pull people back to theatres"

Independence Day 2019: From Vicky Kaushal to Akshay Kumar to John Abraham, here are all the stars who have been a part of patriotic movies this year

national means one... unity...and it's a sign of developed Nation...so watch this movie and learn ,…