Telugu superstar Ram Charan turned a year older on Saturday, March 27. He has been flooded with wishes from his fans, colleagues and family on social media. The love showered on him was not limited to the country. Ram's wife Upasana Konidela took to Twitter to reveal pictures of Ram Charan displayed at New York's iconic Times Square. 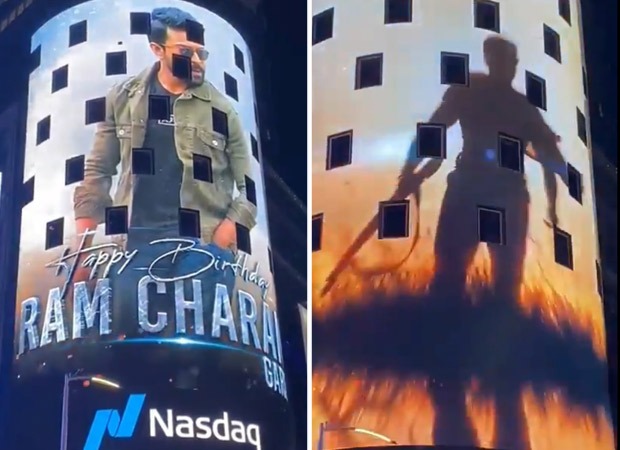 Upasana shared a video giving a glimpse of the pictures of some of the popular characters essayed by Ram Charan on display at Times Square. "This is just WOW what a sweet gesture Thanks for all the love”, she wrote.

This is just WOW ????
what a sweet gesture
Thanks for all the love ????
@Nasdaq #usa #newyork #timessquare pic.twitter.com/UUCC5DzMTi

Cake cutting, Charan cheering, Medical camps, Blood donations, Charitable endeavours, music playing and a lot more fun was visible across 9 cities Pan India where fans rang in the birthday of their favourite hero Charan! While Bengaluru, Mumbai and Jaypore were locations out of town, in AP and Telangana, Warangal, Anantapur, Hyderabad, Visakhapatnam, Guntur and Kadapa witnessed birthday celebrations like no other!

From 9 major events at 9 locations across India being planned to Charan being featured on the NASDAQ building billboard in Times Square, the birthday was all a show of fan love. Over 5000 units of blood was donated in this period across medical camps in 55 locations (Pan India) and a lot of food, water and clothes too were distributed, and all this by fans!

Meanwhile, the makers of RRR directed by SS Rajamouli had a grand surprise for their lead actor on his birthday. Ram Charan celebrated his birthday with the team of RRR on the sets of the film with fireworks, cake and more.

Ahead of his birthday, the team of RRR also unveiled the first look poster of his character Alluri Sita Ramaraju. Sharing the look on Instagram, Ram had written, “Bravery, honour, and integrity. A man who defined it all! It’s my privilege to take on the role of #AlluriSitaRamaraju ”

ALSO READ:Fireworks, cake and more; Ram Charan gets a grand surprise on the sets of RRR on his birthday