With the massive success of RRR, Ram Charan has become a global star. The actor enjoys a massive fan following on the internet. As he is an avid social media user, his fans keep getting a peek into his personal as well as professional life. Giving an update on the latter, Charan recently announced the New Zealand wrap for his yet-to-be-titled film, which will be directed by S Shankar and headlined by Kiara Advani. 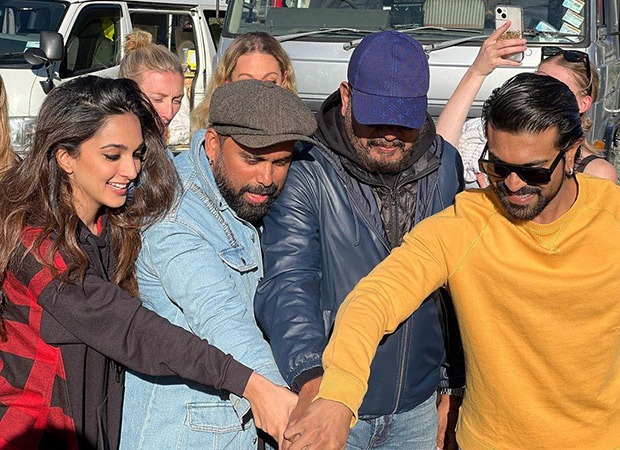 Taking to his verified Instagram handle, Ram Charan shared a bunch of photos along with a note, which read, “And it’s a wrap in New Zealand NZ. song & it’s visuals are fabulous (sic).” He also stated that Shankar Shanmugham Garu, Bosco Martis and Thirunavukarasu “made it even more special.” Speaking of his co-star Kiara Advani, he called her “stunning as always.”

The renowned star of the Telugu film industry also mentioned composer Thaman Shivakumar Ghantasala and wrote, “u nailed it again,” for him. In the last, he tagged designer Manish Malhotra and hairstylist Aalim Hakim for creating amazing looks for the film. Talking about the photos, he can be seen cutting a cake and enjoying the wrap with the crew of his upcoming film.

Coming to the forthcoming film, RC15 will be backed by producer Dil Raju in collaboration with Sirish under the banner of Sri Venkateswara Creations. The ensemble star cast of the film also includes S J Suryah, Anjali, Jayaram, Sunil, Srikanth, and Naveen Chandra in other key roles. It is expected to hit the silver screen next year, that is 2023.

Also Read: Kiara Advani and Ram Charan can’t stop obsessing over burgers and it is every one of us ever!