Diwali is all about being around loved ones where the focus is to spend time with family, and that is exactly what Rajinikanth was seen doing during the festive season. The South megastar had a rather private celebration as he visited his daughter Aishwarya Rajinikanth and also spent time with his grandsons, Lingaa and Yatra. 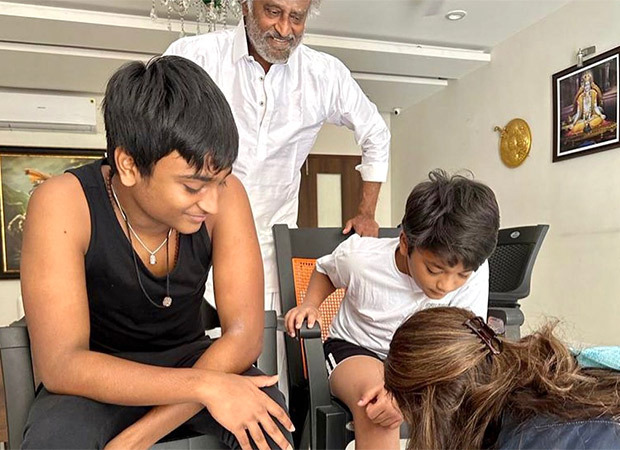 Aishwarya Rajinikanth took to Instagram to share photos from their Diwali celebration. While she was seen applying turmeric and red vermillion as a part of a special ritual on the feet of her sons, the Thalaivar was accompanying them as he stood and watched them complete the ritual. In the series of photos posted by the filmmaker, she also shared one pic where she is seen bursting crackers and lighting sparklers.

Fans were thrilled to see the family together and dropped their Diwali wishes for the Thalaivar on the post. “Periyavanuku apdiyae rajini facecut (elder son looks exactly like Rajinikanth). “Thalaivar ??. Thank you Aishwarya. Happy Deepavali to you and family. Send my wishes and prayers to Rajini sir,” said one fan. “Happy diwali mam, please convey my wishes to rajini sir and to whole family” added another fan.

Missing from the celebrations was Dhanush, who is currently expected to have separated from Aishwarya. While in January the couple announced their separation, rumours have been rife that the two are considering reconciliation owing to the future of their sons Lingaa and Yatra.

Coming to professional commitments of Rajinikanth, Interestingly, his last release was in Diwali 2021 which was Annaathe. The actor will return to the big screen with Jailer, directed by Nelson Dilipkumar. Besides him, the film also stars Kannada superstar Shivarajkumar, and Ramya Krishnan among others.