Social media went into a tizzy on Thursday when a picture of the greatest of the Telugu film industry shared a frame. Mahesh Babu, Chiranjeevi, Prabhas, Siva Kortala, and SS Rajamouli posed together in a chartered plane as they headed to meet the Andhra Pradesh Chief Minister YS Jagan Mohan Reddy for an important meeting. The celebs discussed issues related to the film industry with the CM on Thursday. 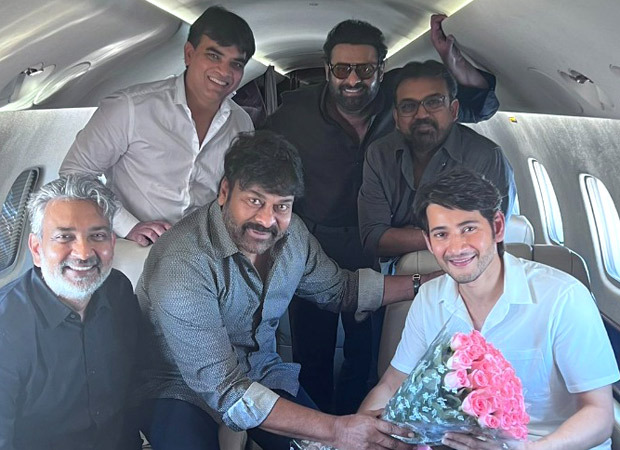 Actor Mahesh Babu and his wife Namrata Shirodkar also celebrate their 17th wedding anniversary today. Due to the high-profile meeting, the superstar could not celebrate the day with his wife. However, colleagues who accompanied him to the meeting wished him on his anniversary by presenting him with a bouquet.

Sharing the star-studded photo from the flight, Chiranjeevi wrote, "Wishing @urstrulyMahesh & #NamrataShirodkar one of the most loveable and loved couples a very happy 17th Wedding Anniversary!! Wishing you both a lifetime of love, laughter and togetherness! (sic)."

Wishing @urstrulyMahesh &#NamrataShirodkar one of the most loveable and loved couples a very happy 17th Wedding Anniversary!! Wishing you both a lifetime of love, laughter and togetherness! pic.twitter.com/jp8RhrsHxn

Mahesh Babu shared the same picture on his Instagram handle and wrote, "A memorable wedding anniversary for me!"

The Andhra Pradesh government has fixed a cap on ticket prices. This has been a topic of discussion for several months now and reportedly was one of the prime topics discussed during the meet with the CM.