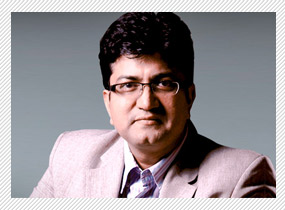 The soundtrack of Satyagraha is all set to be released and there are already murmurs around how purists would receive an altogether unrecognizable version of 'Raghupati Raghav Raja Ram' which forms a key part of the narrative. A popular 'bhajan' which was a favourite of Mahatma Gandhi, it sees a different take on it, courtesy Prakash Jha, who wanted a twist to the tale.

"Ever since the promo of Satyagraha has been out, the song has been under scrutiny," says a source, "Leave aside the fact that it has a much Westernized tone, mood and theme to it, there are also strong hints of suppressed frustration leading to revolution. Moreover, since the lyrics have gone through a sea change in entirety, one wonders how those in the know-how of traditional songs would receive it in today's context.

Prasoon Joshi, who has written lyrics for the New Age 'Raghupati Raghav Raja Ram', is undeterred though. He says, "It is just one line which remains; we have just used the phrase. Everything before and after that has been changed. In that aspect, I had also come up with an entirely different take of 'Sarfaroshi Ki Tamanna' in Rang De Basanti."

Put to tune by Salim-Sulaiman, the song is appears multiple times in the film's narrative.

"Prakashji wanted to use something different for the 'anshan' sequence in the film," continues Prasoon, "When I was writing it, a lot of new stuff started coming in. I was using many popular phrases and this is how lines like 'Bahaut ho gaya hai vishram, Raghupati Raghav Raja Ram' came in. In fact when you hear the 'antaras' there are prayers in there as well. You would hear lines like 'Tum Puran Parmatma, Tum Antaryami' from 'Om Jai Jagadish Hare'. In addition there are many original lines. It is a mix of traditional as well as new things, there is no reason for anyone out there to feel that we have tampered anything."

Well, for that we would like to hear the entire song first. While Prasoon has also written a poem in the film, other composers with whom he has collaborated with in Satyagraha are Indian Ocean, Aadesh Shrivatsava and Meet Brothers.