Last Updated 30.11.2022 | 11:25 PM IST
feedback language
follow us on
Bollywood Hungama » News » Bollywood Features News » WOW! This picture of Akshay Kumar and Saif Ali Khan posing together will take you back to the 90s 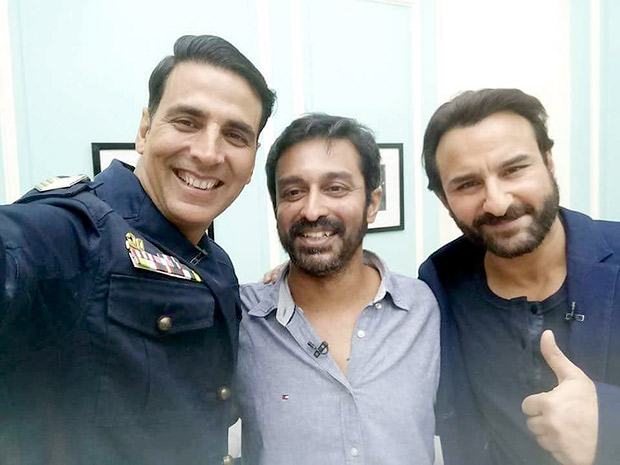 They were one of the most popular two hero combos of the 90s who have given blockbusters like Main Khiladi Tu Anari and Yeh Dillagi. The two actors, like we reported earlier, will be coming together for the show ‘The Great Indian Laughter Challenge’ which will be returning with its fifth season. Now recently we came across the duo posing for a picture but there was an addition in it – it was none other than filmmaker Raja Krishna Menon.

WOW! This picture of Akshay Kumar and Saif Ali Khan posing together will take you back to the 90s

Yes, Saif Ali Khan will be coming as a guest in the first episode of the show ‘The Great Indian Laughter Challenge’ to promote his forthcoming film Chef, which is a remake of the American film by the same name. The actor was accompanied by Raja Krishna Menon who has directed the Hindi version of the same. Interestingly, last year, Menon had given one of 2016’s biggest blockbusters with Airlift that featured Akshay Kumar in the lead role.

This was definitely a get together of sorts with Akshay Kumar and Saif Ali Khan reuniting for work after a long time as well as Raja meeting his Airlift hero after a year and half for the show. Sharing the moment on social media was the director who posted this picture with the duo on Instagram saying, “@Regrann from @cheffilmindia - Happy faces! What a great time. #Chef on #TheGreatIndianLaughterChallenge on STAR Plus thank you @akshaykumar for making it so much fun”

As mentioned in the post, the show The Great Indian Laughter Challenge which was previously aired on Star One will now be aired on Star Plus. It will feature Akshay Kumar as the judge along with Mallika Dua, Zakir Khan and Hussain Dalal as mentors who are on a hunt to find India’s top comedy superstars.